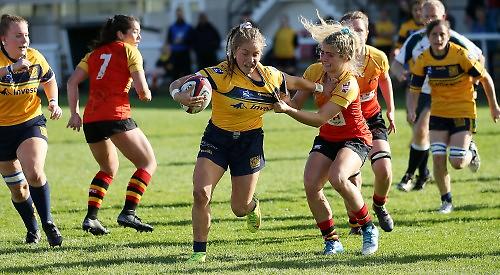 The Hawks put in a solid performance last week in atrocious conditions at Westcliff. They ran in six tries, including one for Alex Harmes, making his debut for the Henley on the wing.

Although the Essex side were missing a number of regulars, the weather could have been a leveller but the Hawks showed great determination and fortitude to come away with a bonus point win.

Following two successive victories, the Hawks have moved up to 11th in the table and are beginning to build some momentum, with two games in hand on most of the other sides.

Esher have had a mixed start to the season. They started strongly by defeating Rochford Hundred (38-14) and followed that with two big victories, an impressive away win at Dings Crusaders (45-19) and then a home thumping of Barnstaple (64-22).

Since then, they have stuttered somewhat, losing at Leicester Lions 27-21 and last week they were held to a draw at home by Barnes, the score 17-17. They currently lie in fifth place but only three points behind the leaders, Worthing.

Esher finished eighth that season. Prior to that, Esher spent six seasons in National League 1.

Elsewhere in the league, Worthing Raiders continue at the top with another victory, this time over Rochford, while Clifton bounced back after last week’s defeat to the Hawks with a home win over Hinckley that puts them in second place.

Redruth are third and are the only side still to have a 100 per cent record, coming from behind to pip Old Albanian
22-21.

Guernsey Raiders, who the Hawks visit next week, are fourth following their win over Leicester Lions.

The Henley Hawks Women have no league fixture this weekend but tomorrow they will play a friendly away at Oxford University, kick-off 3pm.