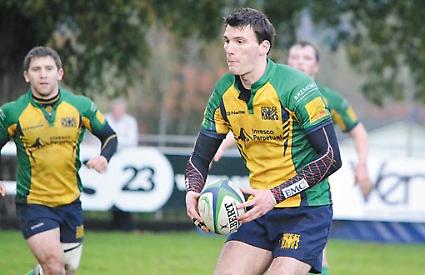 HENLEY HAWKS’ survival hopes took a knock on Saturday as they suffered defeat at Blackheath in an evenly contested National Division match.

The closeness of the game was illustrated as the lead changed hands four times and the result was not decided until the last minute of the match.

The Hawks had taken the lead at 18-15 when fly-half James Comben kicked a penalty from in front of the posts with six minutes remaining. It was a feature of the Hawks performance throughout the match that they could not control the game and maintain possession whenever they took the lead.

As the clock ticked away they took play into the Blackheath 10 metre box on halfway when they conceded a penalty at a scrum which their fly-half Simon Whatling kicked to within 10 metres of the Hawks line. The hosts then amounted a do or die drive with the assistance of four of their backs. Although the Hawks pack throughout the game had more than held their own in all aspects of play they could not prevent Blackheath surging forward for flanker Dave Allen to touch down his 19th try of the season. With a conversion by Whatling the hosts led 22-18 and with just a minute of the game remaining Henley could not reply.

The Hawks had taken a 3-0 lead after just six minutes thanks to a Comben penalty. Immediately after this the Hawks attempts to build on this score were thwarted by some heavy duty tackling by the home side. Blackheath established themselves in the visitors 22, switched their attack from forward drive to their backs and some swift passing caught the Hawks out of order and centre Richard Windsor slipped through the centre with the aid of a strong hand off which, with Whatlings conversion, put them 7-3 ahead.

Much of the play was now in Blackheaths territory but the Hawks handling let them down as they built their attacks.

After 23 minutes the visitors lost the services of hooker Liam Dwyer, awarded a yellow card on the recommendation of assistant referee Simon Bourne for careless use of a boot to prise the ball from a ruck.

Dwyers absence did not cause the Hawks to lose their share of the ball from the set pieces. They kept control of their line out ball and, after suffering some set backs in the early scrums got control to such an extent that they held their own and for most of the rest of the game had the Blackheath eight retreating.

This control put the Hawks moving forward in driving mauls and with just four minutes of the half remaining Matt Payne went over for a try which Comben failed to convert as his kick smashed against an upright.

It was then the Hawks let Blackheath back into the game. They were under pressure near the line but when in possession they failed to clear their lines and tried to run the ball out in hand rather then find touch on the cusp of half-time and in handling the ball the carriers became isolated. With the benefit of possession Blackheath worked to break through the Hawks cover and Michael Canty, up from fullback, scored an unconverted try to give the hosts an unexpected 12-8 lead at half-time.

The Hawks, playing with a breeze behind them in the first half, shunned the opportunity to kick penalties from straight forward positions to build a useful lead.

On the resumption they had to work hard to swing the game back in their favour and eventually they began to stretch the home defence. They recovered the lead thanks to a break down the centre by Danny Wells. The ball was set up to allow Comben to step through a fumbling defence to touch down and convert to put the Hawks back in the lead, 15-12.

This advantage was short lived for the Hawks soon conceded a penalty in front of the posts for Whatling to level at 15-15.

Although the Hawks pressed attacks with some strong running by Ed Yarnton and Xavier Andre, it was left to Comben to kick a penalty to put this side 18-15 in the lead although as in the first half the Hawks had shunned the opportunity to kick penalties close to the posts.

The Hawks were guilty of a lack of concentration to keep the home side under pressure as they lost a heel against the head. Their decision making was suspect and they found it impossible to break a solid Blackheath when they had control through several phases of play close to their line.

The visitors gave Blackheath the opportunity to steal the spoils in the last moments of the game and their only reward was a losing bonus point.