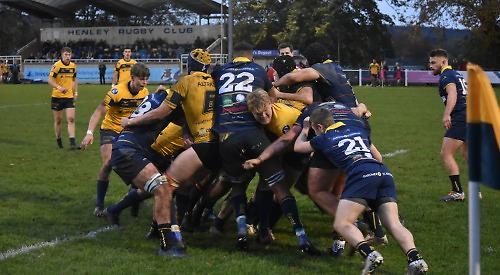 HENLEY HAWKS got their season back on track with a superb bonus-point victory against league leaders, Worthing Raiders on Saturday in a pulsating and open contest at Dry Leas.

It was a much improved performance from the Hawks following the disappointment of the previous week’s home defeat.

Henley were committed, clinical and even though Worthing got back into the game in the second half, the Hawks held their nerve, were clinical at crucial moments and ran out deserved winners by the end.

The Hawks were excellent for the first half an hour, not giving the Sussex side a chance to settle as they stormed into a 21-0 lead.

The Hawks forwards took the game to their opponents and the back row of Tom Hall, Marcus Lowe and Alex Bradley dominated the breakdown and the loose play.

After just two minutes, Hawks centre Guy Rawsthorne broke clear to score after good work from Cail Cookland and Lowe. Then, shortly afterwards, good work from wing Reuben Norville and Bradley put scrum half Will Crowe clear and he beat the covering defence to cross for a try. Cookland converted both.

The Hawks continued to threaten and shortly afterwards extended their lead with their third try. George Wood ran a good inside line, breached the Worthing defence and fed hooker Tom Emery who scampered over close to the posts. Cookland again converted.

At this point Worthing were stunned by the pace of the Hawks attacking play and began to get back in the game and show why they have been the top side for most of the season so far.

Their first real venture into the Hawks half resulted in a try for prop Ken Dowding who finished off a driving maul. This was quickly followed by a second try for the visitors when hooker Henry Birch finished off a similar move. Both tries were converted by Matt McLean.

Although Worthing were now back in the game, the Hawks continued to try and attack at every opportunity with wings Norville and George Wood constant threats, well supported by Cookland from fullback.

Henley responded to the Worthing scores immediately when Cookland claimed the bonus-point try, finishing off some good work from Hall and Wood to give the Hawks a 26-14 lead at the break.

The Hawks were a little shell-shocked as Worthing came out for the second half with renewed purpose and scored two quick tries.

Wing Levi Davis crossed for a try when the Hawks failed to deal with a kick through. Then, Worthing second row John Lee crashed over for his sides bonus point try which was converted by McLean.

At 26-26 it was now anyone’s game. The Hawks found it difficult to build any momentum and were guilty of some loose kicking, giving the ball back to their opponents to launch another attack. However, despite struggling at the set pieces, Henley dug deep and held their nerve, and defended with commitment.

When they got the chance, the Hawks put together some good moves with centres Rawsthorn and Will Panday running strongly. It was a good break from Panday who put the Hawks into Worthing territory and from a resulting penalty and then line-out, the Hawks went to their tried and trusted driving maul which Emery finished off with the Hawks’ fifth try. Cookland converted.

With the game becoming more open, tiredness was a factor as both sides looked for the deciding score and there were plenty of handling errors and mistakes. Eventually the Hawks worked their way into the Worthing half and Cookland eased the home side’s nerves with a penalty.

In the final minutes, Norville received the ball on the halfway line, and produced a fine chip and chase and then outpaced the Worthing defence to score under the posts much to the delight of his team mates and supporters. Cookland converted.