Sporting Hawks secure a share of spoils at Barnes 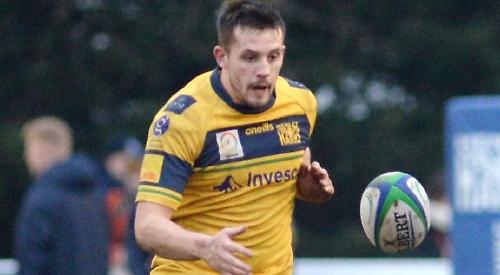 HENLEY HAWKS took the plaudits for their sportsmanship in their draw at Barnes last Saturday.

With the scores level at full time Henley were awarded a penalty for a home player not rolling away at a ruck. However, the Barnes player was injured at the time and was unable to roll away so Hawks kicked the ball into touch instead of going for the winning points.

This was always going to be a tough assignment against a Barnes team that displayed good attacking intent and had only been beaten once at home all season.

The game started at a frantic pace with both sides showing willingness to run the ball from almost anywhere on the pitch.

Henley were first into their stride as a series of attacks enabled Reuben Norville to get outside his man and slip the ball to Rhyan Scott Young who went over for an excellent try on about 15 minutes, the conversion from Matt Dalrymple just shaved the upright.

However, Henley had set down a marker and Barnes needed to respond. This they did with tries in quick succession. Once again handling errors and poor kicking, particularly out of defence, handed the initiative to the hosts and they were able to build effective attacking positions. Eventually the pressure told and a well-worked try from the Barnes winger saw the hosts level the scores.

Unfortunately Henley were unable to clear effectively from the kick-off and Barnes were able to build a period of pressure on the Henley line. From one such penalty the hosts’ scrum half caught Henley napping and a quickly taken tap penalty was well executed for an opportunist try. With the conversion successful Barnes were now in the driving seat at 12-7.

This spurred Henley into action and once again good attacking phases of play resulted in Will Crow playing an advantage and weaving his way to scoring under the posts with an easy conversion for Matt Dalrymple. At 12-12 it was game on and everything to play for at half-time.

The second half was a pretty torrid affair with both sides guilty of errors but it was Barnes who scored next in the 68th minute after a sustained set of attacks produced enough space for the host’s centre to squeeze over with the conversion narrowly missing it was now up to Henley to go and win the game.

The Hawks showed great character and were unluckily not to be awarded a penalty try when a driving maul was held up over the line after a penalty infringement. Undeterred they attacked again and were rewarded for their efforts when Samson Adejimi was at the back of a driving maul to dot down. However, Dalrymple slipped as he took the conversion and the sides were once again locked at 17-17.

The last few minutes saw Henley attacking to gain the vital position for a win and at a ruck wide out on the hosts’ 10-metre line Henley were awarded a penalty for a player not rolling away. However, it was obvious that the Barnes player had taken a heavy blow and was unable to move away. After some discussion amongst the officials and Henley players it was decided to kick the ball into touch rather than play out the penalty. This brought the game to an end.

As a result of this gesture Henley received numerous tweets and messages from across the rugby community including the rugby football union, congratulating them on showing true sportsmanship and kindness.