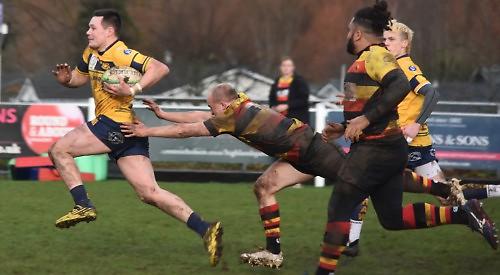 HENLEY BULLS went down to a narrow home defeat against Richmond Normans in an entertaining clash at Dry Leas in a match played out in difficult wet and windy conditions.

The Bulls, who had a number of players playing out of position, kicked off as big tackles started to fly in early on.

In the early stages both teams were testing each other and it was Richmond that got the upper hand and moved into the Bulls’ half as Scott White, Will Benning and Rhys Amos were leading the tackle count. Soon the pressure told and Richmond scored out wide after drawing the defence in narrow.

Straight from kick off the Bulls responded, a charged down kick saw the ball fall to Toby Gilbey who sprinted through to pass to Guy Rawsthorn who was caught just short. The ball was recycled and White dived over.

Soon after, Gilbey had a quick tap penalty and break was unlucky not to find James Christian in support.

Leo Webb and Rawsthorn then took play up to the Richmond half but the defensive effort from visitors allowed them to turn the ball over. This was the story of the remainder of the half bar one mistake which allowed Richmond in to make it 12-7 at half-time. The second half kicked off with the Bulls looking to continue to attack. Benning was keeping Richmond honest at the scrum by breaking off and winning the gain line battle.

Rawsthorn was bringing Sam Allen and Ben Venner into the game by finding space for them to make half breaks. It was the Rawsthorn-Venner combination that brought the next score, Rawsthorn spotting the gap behind with neat grubber kick for Venner to run onto with his pace to out run the defence.

Richmond replied with two quick tries to make the score 24-14 with 20 minutes to go. The Bulls kept looking to play and were finding holes in the Richmond defence and White was next to make a break and find Oscar Gutierrez only to be caught short by a scrambling defence.

Gilbey was next to make a break out of his 22 only for his kick ahead to go out of play. Venner went close again from a smart kick through from Rawsthorn. Venner then scored after Allen made a counter attack with the ball quickly recycled and moved out by Jack Allison to Venner who stepped his defender to touch down in the corner. The Bulls kept plugging away but couldn’t find another score.