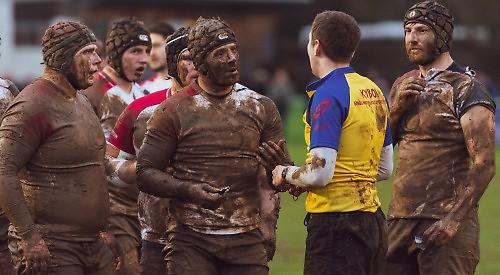 With the elements against free-flowing rugby and the pitch cutting up as the afternoon wore on, Tonbridge headed into the break 13-10 to the good on the back of a Tom Nicol try and eight points from the boot of Tom White. Rams replied with a Henry Bird five-pointer and a Humberstone conversion and penalty.

White’s third penalty early in the second half made it 16-10, only for Jamie Guttridge to touch down by the barest of margins.

Another White penalty made it 19-15 heading into the final quarter but Rams dominated the last 20 minutes and finally broke the hosts’ resistance when Rowan Grundy’s cross-field kick eventually led to Humberstone touching down on the left.

After the fullback landed the extras, the visitors closed out the final couple of minutes to halt a two-game losing streak and start 2022 in the perfect fashion.

Reflecting on the game, Reynolds said: “When you’ve lost two on the bounce and you’ve not had rugby, and especially in these kind of conditions, it can be the kind of game which doesn’t go your way.

“To dig that out and get the win was important and I think we deserved it.

“Tonbridge played with a lot of heart and you can see what they’re trying to achieve, trying to get themselves out of a position they don’t want to be in.

“When you come across that you have a side who are very dangerous, and on top of that you have the fact this isn’t an easy place to play, and on top of that the rain came in and the pitch is torn up to the point you probably couldn’t have played much longer. It was one of those days where it was arguably better not to have the ball and I thought it was a brilliant, brilliant win.

A feature of Rams’ victory was their increasing dominance at set-pieces with the scrum at its best and Ollie Taylor causing major problems for the Tonbridge line-out.

Reynolds said: “The pack were outstanding. The scrum really got going with James Baker, Ant Marris and Max Hayman in the front row very, very good, Colin Thomson in the engine room and the maul — something we worked on in the week knowing conditions might not be good — also went really well.

“I’d also give a special mention to Jamie Guttridge — he took high ball after high ball and did a terrific job.”

The back row grabbed his 45th first team try with some deft footballing skills in the right-hand corner and Seb added: “I watched him do a kick at Exmouth once which was one of the worst I’ve ever seen — so he can have that one back now.”

Rams’ third try also came from the boot, but on this occasion the director of rugby was less surprised as youngster Grundy showed his class at the death Reynolds added: “It’s what he brings. Even in those kind of conditions, he had the game sense to realise with a penalty advantage ‘I’m going to put a little nudge into the corner here’ because when you get those chances you can try and break out and create something, and that’s probably the reason we won. We were just able occasionally to put a couple of plays together and get the scores.” Having endured a stop-start season which had seen his side play just three times since the end of October — and defeats in the previous two — Reynolds is hopeful the remainder of the season can play out in a more routine fashion, despite his side being due to play on 15 of the next 16 weekends in a brutal schedule.

He said: “It’s not all about results and the most important thing is we’re constantly developing as a squad — and I feel like we are.

“The fact we got the games on across the league today was important. During the Christmas period and the rising infection rate you start to wonder what is going to happen, but I think the National League have made positive steps in saying we can get rugby on and boys the want to play.”