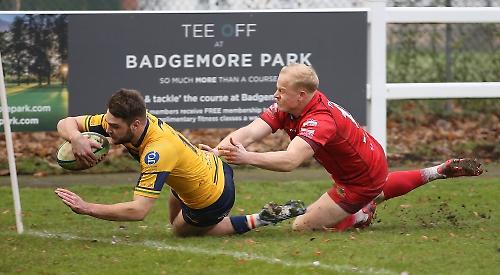 HENLEY HAWKS and Redruth shared the spoils in a pulsating 21-21 draw at Dry Leas on Saturday.

Both sides, but in particular the Hawks, will see this game as an opportunity missed, and they were both frustrated that they couldn’t do enough to edge the game and keep the pressure on Clifton and Esher at the top of the table.

It was a game played between two even teams and the coaches of both sides were both philosophical and frustrated with the result of a game that either of them could have won.

Henley Hawks head coach Luke Allen said: “The boys worked hard this week to be more clinical and we knew against a side like Redruth that the collision areas were crucial. Credit though to Redruth who defended excellently in the second half.”

The Hawks started the game well, and were quickly 14-0 ahead before Redruth came back and got the upper hand during the middle part of the match and went ahead just after the break to lead 21-14.

The last quarter of the game was dominated by the Hawks who launched numerous attacks at the Reds line. However, they weren’t quite creative enough, and the Cornishmen, who are not third in the table for nothing, defended excellently.

It took the visitors some time to get the long journey out of their system and in that time the Hawks took advantage and built a 14-0 lead.

Henley took the lead after just eight minutes when a solid scrum allowed Reuben Norville to create space for Alex Harmes who crossed in the corner for his first try for the club. Monty Bradbury converted from the touchline.

The main threat from the Hawks came from Harmes and wingers Reuben Norville and Rhyan Scott-Young whose pace gave Redruth problems all afternoon. Tom Hall excelled in the back row taking the game to the Redruth pack at every opportunity.

The Hawks extended their lead shortly afterwards when a Redruth attack broke down on the halfway line and centre Harmes picked up the loose ball and outpaced the chasing defenders to score his second try. Bradbury again converted.

Redruth eventually got their game going and spent the last 20 minutes of the first half in Henley territory. The Reds pack dominated the loose exchanges and a driving maul from a line-out was finished off by hooker Richard Brown for Redruth’s first try. Will Trewin converted. With Redruth now in the ascendancy, the Hawks were under constant pressure, got themselves on the wrong side of the referee’s whistle and were penalised numerous times at the breakdown. Henley’s defence, led by Tom Emery and Tom Hall, held firm but after a barrage of forward drives by the Redruth pack, Brown grabbed his second try, finishing off another driving maul. Trewin converted to tie the scores 14-14 at the break.

Redruth looked more likely to score at this stage and took the lead straight after half-time when second row Luke Hattam crashed over from short range. Will Trewin again converted and it looked as though Redruth had control and would go on and see the game out.

The Hawks had other ideas and began to get themselves back into the game. They started move the ball more effectively and after a couple of chances were missed, a good move involving Jake Albon, Guy Rawsthorn and Norville went close.

Henley then put immense pressure on the Redruth line. A driving maul was stopped three times illegally by the visitors and so the referee had no option but to award a penalty try which brought the scores level again.

Henley enjoyed most of the territory and possession during the last 20 minutes with Norville again and Emery going close.

The Hawks, despite going through constant phases of possession, did not quite have the creativity to turn their possession into points and the Redruth defence was excellent.

The Hawks turned down three awkward penalty kicks at goal in the last 10 minutes and instead kicked for the corner, looking for a bonus point, only for each attack to be snuffed out by the Cornish defence. In the end, despite both sides’ frustrations, a draw was probably a fair result.