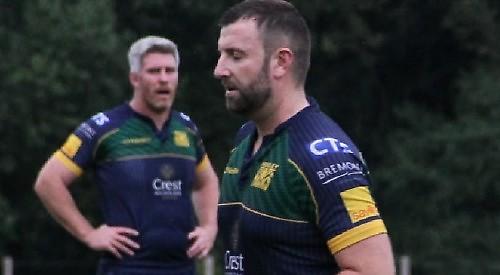 A RUGBY coach from Henley has found love after appearing on a Valentine’s special edition of TV show First Dates.

But Chris Norton’s new partner is not the woman he dated on the programme but someone he met subsequently through friends.

He was divorced three years ago so he signed up to appear on the Channel 4 show in order to boost his confidence.

Mr Norton, 36, is a semi-professional coach with Henley Rugby Club’s third team, the Vikings, and a business partner in Punk Vegan, a vegan takeaway restaurant in Leeds, where he went to university after leaving Gillotts School and The Henley College.

Previously, he worked as a teacher in Antigua, where he lived for 10 years before returning to Henley in 2015.

He was divorced in 2019 and has a four-year-old son, James, with his former wife.

The latest series of First Dates was filmed in Manchester in 2020 during the coronavirus pandemic but Mr Norton’s episode was not shown until Thursday last week.

He was filmed on a blind date with 35-year-old veterinary nurse Kaz, from Watford, at The Refinery restaurant in the Spinningfields area of the city. Mr Norton said: “I applied for the show after the divorce. I felt like I had lost my confidence and I wasn’t used to dating. I felt the show would be a great way to build back my confidence.

“I had forgotten about it until a few months later when I was invited via the telephone to take part.

“Being in the restaurant was so surreal. The cameras are all remote, so you don’t have a crew watching you.

“I felt quite at ease, which I was surprised about. It was easy to forget that I was being filmed at times.

“I entered first and was met by restaurant host Fred Sirieix, who was lovely, as was the barman Merlin Griffiths.

“Halfway through the dinner Fred came up to me and pretended to throw me a rugby ball. The restaurant was lovely but the food wasn’t as good as I had hoped it would be.

“I’m vegan and have been for three-and-a-half years but there weren’t very many vegan options on the menu, so I had a pasta.

“After the date with Kaz we were taken to the studios to film the conclusion of the date where we agreed we would like to see each other again.

“After that we were filmed getting into a taxi together which drove around the block.

“Then we got out and had a couple of drinks in the hotel lobby, because there were still covid restrictions at the time.

“We met up once more outside the show but decided to just remain friends.

“She has a boyfriend now and I know she wants to start a family so I am really pleased for her.

“I’ve been dating someone for three months now. I met her through friends. We went on a double date and have been seeing each other since.

“She has seen the show and thought it was brilliant — she watched it a twice.

“I reminded her that it was filmed nearly two years ago. I didn’t tell any of my friends I had filmed the programme. I had to keep it a secret until the show would be aired. My friends at the rugby club set up a screen for us all to watch it on and they loved it.

“There was plenty of banter but the general consensus was that I came across well. I was worried I might have said the wrong thing. It was filmed so long ago now thatI couldn’t remember half of what I had said.”

Mr Norton decided to become vegan in 2016 after suffering a heart attack following a rugby match.

He said: “We won the game and once we were back in the locker room, I sat down and took a couple of sips of cider and I felt like someone had reached into my chest and squeezed my heart.

“I put it down to acid reflux but the pain got worse once I was home.

“I ended up being very sick, freezing cold and had no energy. I vomited blood later that afternoon so I called 111, who told me I was having a heart attack.

“They rushed me to the hospital and by 3am I was in theatre in Uxbridge having a stent put into my heart. My family didn’t know because my phone had died and my fiancée at the time was away on her hen do.

“The doctors think the heart attack occurred due to a big collision in the game. I am lucky it was a heart attack, not a cardiac arrest.

“They told me I would never play rugby again but I’m stubborn and I wanted to prove them wrong. I changed my diet because after the heart attack I couldn’t keep red meat down so I decided to cut it out altogether.

“This inspired me to set up my own vegan junk food-style restaurant where people can get burgers and wraps but it wasn’t to be due to the pandemic.

“About 18 months ago my brother and I went to watch the Leeds Rhinos play and then we found Punk Vegan, which is owned by Bex Dawson. I was so impressed that I invested in her business and became a co-owner.

“I would like to set up a Punk Vegan restaurant in this area at some point.”