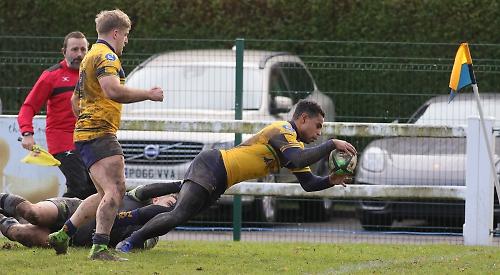 So dominant were the Hawks that the visitors only threatened the home side’s 22 with the final play of the game.

The Hawks dominated territory and possession, created plenty of chances and but for the conditions, and some tenacious defence from the Islanders, they would have won by a lot more.

When Guernsey did get hold of the ball, they had a somewhat laid-back approach, but they also often found themselves deep in their own half and the Hawks had no trouble keeping them there.

The first half was a cagey affair with both teams having to contend with driving rain to start with and a muddy, sticky pitch. The rain quickly relented but both teams had trouble handling the slippery ball or getting any fluency into their play as there were quite a few handling errors from both sides.

The Hawks took the game to the Islanders right from the start with the forwards offloading at every opportunity and Will Crow dictating things from scrum half. Samson Adejimi and the back row of Tom Hall, Lunnon and Alex Bradley dominated the loose exchanges.

The visitors defended stoutly but the Hawks finally opened the scoring after 20 minutes when fullback Guy Rawsthorn made a good break and combined with James Davies to put Norville in for his 14th try of the campaign. The windy conditions were not ideal for kicking and the conversion was missed.

Constant Henley pressure continued and after some good forward drives, particularly from Lunnon, the Hawks won a penalty which gave Cail Cookland the simple opportunity to kick and extend the Hawks lead.

The game was halted for almost 10 minutes due to an injury to Guernsey hooker Dan Morgan. When the match resumed, the Hawks continued to dominate with Hall and Adejimi proving to be a real menace to the visitors’ defence, but they couldn’t add to the Henley tally before half-time.

Henley played with the wind at the backs in the second half and kicked well, keeping the visitors pinned in their own half.

The Hawks created pressure again immediately and a penalty enabled Cookland to put the home side deep into the Guernsey 22.

Following a Hall-led driving maul, the Hawks backs got hold of the ball and despite a weak pass, some neat footwork from George Wood saw the winger score in the corner to put the home side 13-0 ahead.

Cookland again kicked Henley into a strong attacking position and from a ruck in midfield, Will Crow capped a fine performance when he added Henley’s third try. Sniping around the fringes, he broke the Guernsey defence and then scampered 20m to score. The Hawks tried forcing things a bit too much at this stage, looking for the bonus point try. They came close a number of times but the best chance was a little unfortunate. Tom Emery put Norville clear on the blind side. He chipped ahead and although outpacing the defenders, the wind carried the ball over the line just as Norville was diving on it.

The Hawks eventually added their fourth and bonus point try, 10 minutes from the end. Bradley picked up from a scrum and passed to Crow whose kick through was well gathered by Wood to get his second touchdown of the day.

Lunnon and Adejimi were a constant threat for the Hawks right to the end but Guernsey, to their credit, never gave up, and almost got on the scoreboard with the last play of the game. Ten metres from their own line, they chipped over the Hawks’ attacking line and then put together some good handling between their backs that almost resulted in a length of the field try. However, the Hawks defence scrambled back to make sure the visitors went home with nothing to show for their efforts.