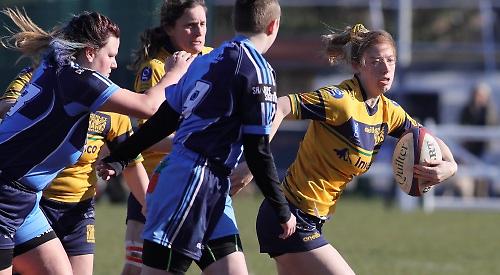 Henley attacked quickly to allow Lauren Mueller to dot down within the first 10 minutes. This would be the first of five tries for Mueller.

Shortly after the restart, a scrum led to a scrambled defence from Supermarine to try and hold the tide. However, a last-ditch attempt to stop Lisa Fitzpatrick from crashing over the line was in vain and this led to a penalty try and yellow card for a high tackle.

This did not dampen Supermarine’s spirits as the opposition attacked convincingly, but it was not enough to beat a solid Henley defence.

A lofty pass from Supermarines was intercepted by Olive McNaney, who comfortably ran the 60m to dot down over the line. In the final minutes of the first half, Henley were on the attacking foot again, with Jeni Kingman crashing over between the posts to leave her side 34-0 up.

Henley broke through the tired visiting defence early in the second half to allow Rachel Humphreys to cross the line.

Supermarine continued to try and defend, but to no avail with Lini Kaufana crashing over on her return from injury.

Henley continued to allow their attacking play to flow, with Ellie Smales breaking through for the final try of the game.

ABBEY WOMEN responded well to their previous week’s heavy defeat by securing a 36-15 bonus-point victory against BUCKINGHAM SWANS, which saw five different players touch down over the line.

An opening score from hooker Claire Stevens, off a well-worked set piece line-out move, calmed the home side in a chaotic opening period.

Buckingham, although several places below Abbey in the table, were up for the challenge and brought strong carries from their pack as well as hard hitters in defence. Strong at the breakdown, they contested well and were keen to disrupt Abbey’s ball.

A series of penalties for the home side allowed centre Mia McCreesh to kick for touch and move her side into Buckingham’s 22. Eventually the chaos swung in Abbey’s favour and flanker Abi Wall cut a line up the centre of the pitch to grab her maiden try of the season. Alice Denton-Rice was successful with the conversion to make it 12-0. With a dominant scrum, captain Annabel Hawkins had a strong carry from the base of the scrum before crossing in the corner.

It was Buckingham who would have the final say of the half with a fine individual run from their outside centre Shaniah Herelle, who scooped up a mistimed pass from the Abbey back line, and ran in 60m to score. Despite the best efforts of fly-half Annette Bevan, Herelle outran her to cross in the corner.

In the second half, straight from kick off, pressure from replacement winger Liv Grane forced Buckingham to play from deep once more. Fullback Alex Wilkinson fielded clearance kicks well and was strong when returning them. Abbey were patient and although eventually lost possession, McCreesh showed a good read of the game with an interception between the Buckingham centres. Flanked by Bevan and Wilkinson, it was her turn for a 60m sprint to the line,
securing the bonus-point try under the sticks and Denton-Rice was successful with the conversion.

Although Buckingham replied with two tries of their own, Abbey, now playing towards their clubhouse, continued to press and it was Denton who grabbed two tries in as many minutes, the first with a powerful run over the line and the second from a well-timed pass from her centre partner McCreesh. Converting the second, Abbey finished the game 36-15 winners.