Hawks left frustrated as hosts fight back to draw 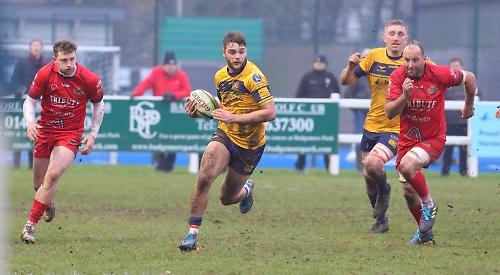 LAST Saturday’s clash at Bury St Edmunds was a game Henley should have won after building a 10-point lead and with 15 minutes to go it looked as if a bonus point victory was on the cards.

The first half was a hectic affair with neither side gaining control in any phase of the game. However, Henley were the more inventive and went close to scoring on a couple of occasions but a resolute home defence held firm.

Henley were disrupted at the beginning of the game as Guy Rawsthorn pulled a hamstring in the warm-up and was replaced early on by Will Panday. In addition, a nasty injury to scrum half Will Crow after 25 minutes meant another reshuffle as Reuben Norville went to scrum half.

Bury were first up on the score sheet with a penalty after 10 minutes but Henley were quick to reply with a penalty from Cail Cookland. Much of the play took place in the middle of the field although Bury did create a try from a driving maul to take an 8-3 lead.

It was clear that if Henley could secure some quality ball they would cause some issues outside. This was the case right on the stroke of half-time as the ball was moved wide to Alex Harmes in the centre and some strong running saw the centre score his eighth try of the season in the corner. Unfortunately the conversion fell just short.

The second half continued much as the first with neither side able to dominate. However, a turnover ball well inside the Bury half was cleverly picked on by Sam Lunnon. The Henley skipper ran with pace and guile to avoid would-be tacklers before making the final pass to Harmes for the centre to score wide out.

Bury were quick to reply with a try of their own from some powerful running of their forwards who were starting to gain the upper hand in the scrums.

With the scores locked at 13-13 Henley now had their best phase of the afternoon as they created a number of promising attacking opportunities.

From one such move a penetrating run from James Davies saw the centre cross close to the posts for a well-taken try. With the successful conversion and a penalty 10 minutes later Henley had established a 10-point lead.

However, the visitors were beginning to struggle at the scrums and this allowed Bury back into the game with another driving maul which was converted, and further pressure saw Henley caught offside in front of the posts and Bury were able to level the scores.

The final 10 minutes was a fairly frantic affair with both sides having chances to push for the bonus point win but the visitors had to be content with two league points and remain in fifth place in National 2.

On a positive note this game marked the return of Will Bordill after several months away from the game.