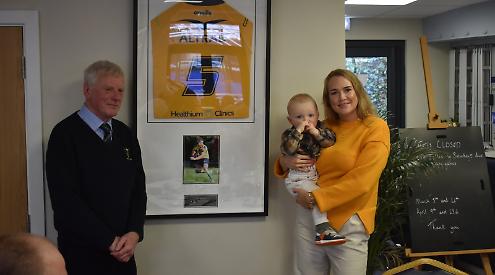 A LUNCH was held at Henley Rugby Club to remember a player who died last year.

Players, club officials, supporters and friends attended the lunch on Saturday together with his widow Katherine and their son Tore, who recently turned one.

The club awarded Mr Hyde’s 100th cap to Tore and club president Graham Horner unveiled a frame with a photo of Mr Hyde and his number 5 shirt in the clubhouse.

Nigel Dudding, the club’s director of rugby, said: “David was a superbly talented athlete. He was the scourge of the opposition line-out.

“David’s influence will never be lost at this club, it lives on through the lives of everybody here and for that we thank him.”

Peter Hyde said: “My brother, like myself, was a very simple man. He liked his wine red and he liked his steak rare. He had three main loves in his life. He loved his family, he loved his rugby and he loved his car. He was a real gentle giant off the pitch but, as we all know, a bit of an animal on the pitch.

“He played basketball, rugby and he had a hell of a football career as well.

“I think it’s no secret that he did have a couple of offers to go elsewhere, to go up a league or two and leave you boys in the dust, but he wasn’t gonna do it — not because they wouldn’t pay him enough, but because he’d miss you too much.

“For him it was always about you guys, he always wanted to be part of the pack and with you out there grafting. Today would mean the world to David to know how much you guys thought of him.”

Mrs Hyde said: “I was dreading today to be honest because it’s not something you want to be having to do for your spouse.

“But I’m very grateful we’re celebrating his life. The rugby club did his wake after the funeral, they put on all of that and paid for all of it and supported me.

“And the fundraising they’ve done for me was amazing. It helps remove the added stress because I’ve got a mortgage and bills.

“Although I feel very unlucky, I actually feel very lucky too to have this support. The wives and girlfriends of the players have been incredible, bringing me food and being there for me.”

Later in the afternoon, the Hawks played a game against Canterbury and won 12-10.

Both teams wore orange socks or wristbands during the game as it was Mr Hyde’s favourite colour.

Hawks’ captain Luke Allen said: “It has been an emotionally charged day and that can take a lot out of players but we tried to use that as a motivator.”

After Mr Hyde’s death, the club launched an appeal for his family and more than £90,000 was raised.