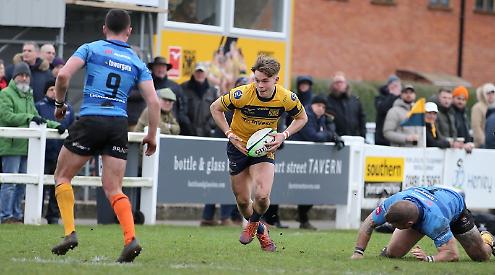 HENLEY HAWKS ground out victory last Saturday when they overcame a gritty Canterbury side in a committed contest to take the spoils.

The match was played in tribute to David Hyde, the Hawks’ number five who collapsed and later died after their first match of the season in September.

Both sides scored two tries but as a game of rugby, it won’t be kept in the memory for very long by the hardy souls who ventured to Dry Leas to watch the action.

The loose exchanges were fast and furious but the defence of each side cancelled each other out leading to a number of handling errors and poor execution by both teams of most of the opportunities they had.

Both sides tried to move the ball from the start, but it was Canterbury who opened the scoring when wing Dwayne Corcoran crossed for the first of his two tries. Braithwaite missed the conversion.

The Hawks responded well with good drives from Tom Hall, Ollie Frostick and the excellent Sam Lunnon and with it, the home started to gain some momentum. Eventually, after a couple of penalties the Hawks got on the scoreboard when second row Ben Harrison finished off a driving maul from a line out. Cookland converted superbly from the touchline.

The first half was a stop-start affair with a number of stoppages for injuries. With the Hawks having the better of possession, the pressure resulted in a yellow card for Canterbury second row David Irvine. However, the Hawks couldn’t capitalise on having an extra man and squandered a couple of chances from attacking scrums.

The Hawks led 7-5 at the break but the second period started as the first half ended with Henley trying to force things from their own half. Canterbury did the basics well and were the better side for much of the second half.

With Henley pinned in their own half for the first 15 minutes of the half, both teams were frantic in their efforts to keep the ball alive and a comedy of handling errors from both sides almost resulted in a Canterbury score but Henley hooker Tom Emery covered and the danger was averted.

Once the Hawks got into Canterbury territory, a good Henley attack involving Emery, Will Bordill and skipper Jake Albon went close, while Lunnon continued to lead the charges. George Wood on the wing for Henley looked dangerous whenever he could get hold of the ball and made some good runs. Henley increased their lead, a try from another driving maul from a line-out, that was finished off this time by hooker Emery to give the Hawks a 12-5 lead. The conversion was missed.

It looked as though this could be a turning point for the Hawks to go on and win comfortably but Canterbury had other ideas and dominated the rest of the match.

The Hawks again tried to play out of their own 22 but ended up giving away a couple of penalties in defence. From an attacking line out, the ball went out to the Canterbury backs and some good handling put Corcoran over in the corner for his second try.

The visitors then went looking for the winning try, going through numerous phases of play. The Hawks defence stood firm until the visitors won a last-minute penalty just inside the Hawks half. A successful kick would have won the game but it fell short and it was left again to the Hawks defence to see out the final moments and seal the game.