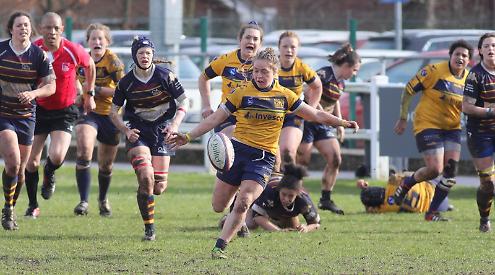 HOST Henley Hawks Women lost out last Sunday in their latest Championship Division 1 South clash with second-placed Old Albanian Saints in a match that was a battle of strength and endurance.

The Saints showed a strong defensive set but the Hawks tried to capitalise early by getting the ball wide.

After quick reactions to a turnover, the visitors managed to win a penalty and catch Henley on the back foot, crashing over the line in the corner.

Henley’s defence tried to contain the threat of the Saints hard runners, with big hits from Ella Whittaker and Rachel Humphreys, but the home side could not hold the visitors.

In the second half Henley returned with a new drive and quick interplay allowed the ball to flow through the backline, reaching Chloe Baker on the wing. Strong support play from the home side allowed the attack to thrive and gain large amounts of territory before a mistake killed the Henley momentum.

The Saints showed strength and determination, with scrums showing the power of both sides. Each scrum tested the Hawks pack who remained firm throughout the game.

In the final minutes, following a strong scrum from the Hawks, Lini Kaufana set the play with the hope of getting the ball wide. A quick defence from the Saints made this difficult for Henley but quick reactions from Kaufana saw her pick from the base of a ruck and step through the scrambling defence to crash over the line, putting Henley on the scoreboard.