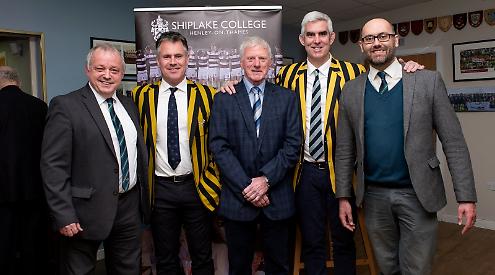 FORMER rugby international Kenny Logan told a fundraising event in Henley how his wife helped him to learn to read and write when he was in his twenties.

The ex-Scotland winger suffered from dyslexia so used to post letters and forms home for his mother to deal with. He felt so ashamed he tried to hide his problems until Gabby, his TV presenter wife, helped him.

Logan, 49, was the guest speaker at a sports supper at Henley Rugby Club, which was attended by 160 people and raised about £12,000.

Club chairman Chris Nixon said: “Kenny was really entertaining. He started by saying he couldn’t read or write until he was nearly 30. He spoke about the issues he had at school and how it was Gabby who identified he couldn’t read and taught him how to.

“Kenny also spoke about the sport of rugby and the life lessons it provides and what he has learnt from the game.”

The event included a game of heads and tails, which was compered by Peter Scrivener, and an auction with prizes including a week’s holiday in a Scottish cottage and tickets to an international rugby match.

Mr Nixon said the proceeds would be used for activities such as coaching and helping children to go on tour at the end of the rugby season.