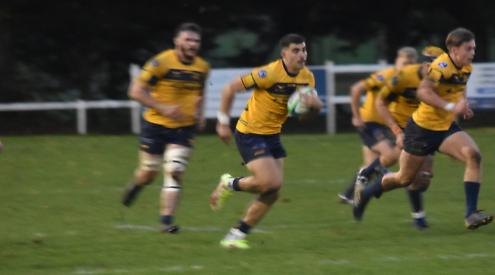 HENLEY HAWKS produced a well-below par performance to a very efficient Worthing team who are well placed in the promotion race for the National Division 2 South title last Saturday.

Henley got off to the best possible start with a clever backline move that opened up the hosts’ defence after seven minutes for George Wood to glide under the posts for Monty Bradbury to make the easy conversion.

A 7-0 lead seemed to settle the nerves and Henley were quick back on the offensive but were unable to convert some promising attacking opportunities.

Henley were left to rue missed chances as Worthing were quick to reply after 15 minutes when some weak defensive organisation allowed opposition Jack Forrest to score midway out and all of a sudden scores were tied at 7-7.

Once again Henley recovered well but were unable to pressure further. Indeed, Worthing went further ahead as their influential backrower Liam Perkins broke through some defensive errors to stretch the lead to 12-7.

At this point Henley enjoyed their best phases of the games when Worthing were forced to concede numerous penalties. However, with three attacking line-outs Henley were unable to convert their territorial advantage to any points.

With three minutes to go until half-time Henley opted to take a penalty shot at goal which just failed. It looked as if Henley were going to be just five points behind at the interval and would come out with renewed accuracy in the second half. However, a killer blow occurred when the hosts scored from deep right on half-time and Henley were facing a 12-point deficit.

It was essential that Henley got off to the best possible start in the second half but they failed to gather the kick-off and Worthing were able to score their bonus point try after only two minutes on the second half. Now facing a 19-point deficit and with injuries to Charlie Hughes and Toby Gilbey the visitors were facing a mammoth task.

Until this point the Henley scrum was dominant but buoyed by their success Worthing set about dismantling the Henley game with some enterprising and forceful attacking play and scored another four tries which led the visitors shell-shocked and disheartened.

Whenever they built promising positions, errors crept into their game and were severely punished by Worthing. The score soon raced towards 50 points and Henley were out on their feet. However, to their credit they scored three tries in the last 15 minutes through a rejuvenated Will Bordill, Will Panday and Marcus Lowe. This meant Henley had secured a losing bonus point with Bradbury converting two of the tries.

This brought a little comfort to the travelling faithful but the defensive errors and missed opportunities proved crucial with a very uncharacteristic performance from a side which has shown remarkable resilience since the start of the season.

With a week’s rest Henley will hope to regroup and hopefully welcome back some of the injured players and ensure a successful conclusion to the season.