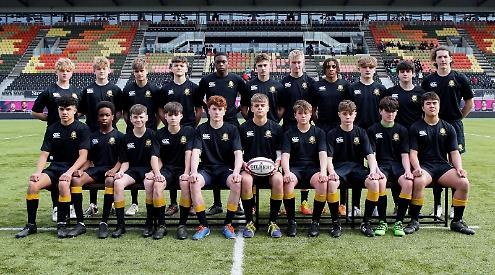 Played at Saracens’ StoneX Stadium before a large crowd, the exciting game could have gone either way, with The Oratory leading 10-0 deep in the second half. A first half try from winger Matthew Carlisle Smith gave The Oratory the lead at half-time and the wide expansive playing style was causing the physically bigger Stamford side problems.

Captain Cian Tappan extended the lead soon after half- time. He showed good composure to scoop up the loose ball and force his way over from close range. What followed was a remarkable 15 minutes that saw six tries scored.

Having led for most of the game, The Oratory now trailed 26-10 going into the final period but after a superb individual try from centre Elliott Saunders, a comeback seemed possible. Saunders, collecting the ball inside his own half, showed great pace to beat his opposite man before rounding the fullback to score under the posts.

Soon after, strong carries from Rocco Vallebona and Archie Wild laid the foundation for Jake Jackson to score. The backrow forward showed good strength to battle his way over the line. The fairy tale finish, however, was not to be as time ran out before The Oratory had the opportunity to launch a final attack.

Head of rugby Mikey Hennessy said: “It was a brilliant spectacle for our boys to be involved in. It was a shame we couldn’t hold our lead but the team should be proud of the way they played. I’m sure this is an experience they will remember for a long time.”