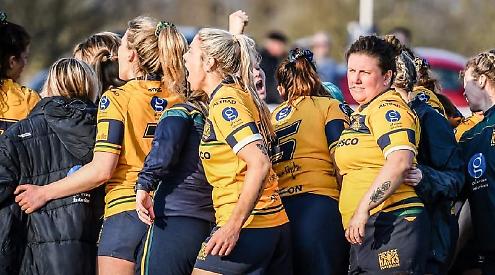 IT WAS derby day for the Henley Hawks Women on Sunday, as they travelled 15 minutes to Reading Abbey. It was billed to be a high-energy game, that was uncomfortably close to call.

The first scrum saw the Abbey forward pack struggle to hold the Henley drive, which boosted the morale of the travelling side.

Following some quick-thinking attack and impressive interplay between the Henley backline, Lini Kaufana sniped the ball from a breakdown and rolled over the line to put the first points on the board.

After winning a line-out close to the Henley try line, Abbey were keen to respond.

Pinching in the defence, the home side looked to score in the corner. Luckily for Henley, Moody’s quick feet allowed her to grasp an intercept and sprint away for the second score of the game.

Throughout the first half, the Reading Abbey ladies did not drop the intensity, holding Henley accountable at every opportunity. Before the half-time whistle, Abbey intensely attacked the Henley line, testing the defence. The home side sucked the defence in before pushing the ball wide, putting themselves on the scoreboard.

Following half-time, neither side let the standard or aggression drop. The travelling side were tested heavily and allowed the discipline to drop, causing Kaufana to pick up a team yellow.

Following this, the team, worked to regain discipline and not let the defensive set drop. However, the home side used this time to capitalise, securing a deserved second try through some decisive attacking lines.

Henley responded decisively, understanding they needed to increase the difference on the score board.

The travelling side won a penalty late in the second half and elected to trust Rachel Humphreys’ boot to secure the three points.

The game was hard to call until the end, however, Henley held on to the win until the final whistle.

It was an aggressive contest between the sides, with the final score Reading Abbey Nuns 19 Henley Hawks Women 29. This result leaves all to play for in the final game of the season, where the women host Richmond at Dry Leas on March 27.