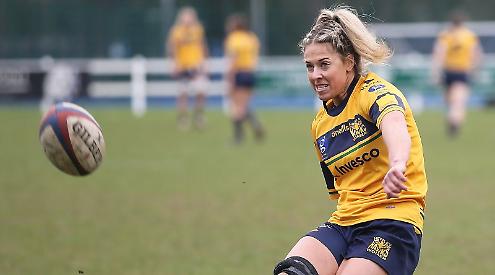 IT WAS an emotional day for the Henley Hawks Women on Sunday as they hosted Richmond Women for the final game of the season.

Richmond kicked off the game and were met with a powerful attacking drive.

Henley looked at capitalising in the early minutes of the game, pushing the ball wide to Juliette Render who perfectly broke the line, a great start to her final game for the side. Render offloaded the ball to Nina Webb, whose pace could not be matched. Webb dotted down under the posts to put the first points on the board.

Following the restart, Richmond were keen to respond, winning a turnover in Henley's half. Taking advantage of an overeager Henley side, Richmond elected to go for posts on an offside penalty, achieving their first three points of the game.

A big defensive set was required to keep Richmond at bay, and big hits from Simpson and Ellie Smales applied the pressure needed. Henley capitalised on a messy ball, causing a slow scramble from the Richmond defence and allowing Webb to crash over for her second try of the game.

Henley refused to drop the intensity throughout the first half, securing their third try of the game through a central line break from Sam Page.

After half-time, Richmond were noticeably more fired. Using clean attacking ball the travelling side scored early in the second half.

The Hawks women showed some ill-discipline and the opposition elected to go for the posts again, bringing the score to 21-25 in the final 10 minutes of the game. Henley rose to the challenge, attacking decisively to remain in the Richmond 22. Katie Phillips identified an overlap and shipped the ball to the wing, allowing Joanna Sawyer to dot the ball down in the corner.

It was a tight contest until the final whistle. The Hawks Women came out victorious with a final score of Henley Hawks Women 26, Richmond Women 25. This leaves them fifth in the table as the league finishes.

It was a deserving send-off for Tina Simpson on her 219th cap for the club.