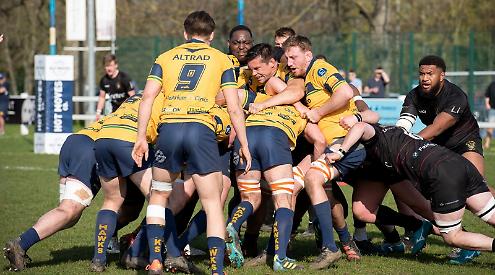 HENLEY Hawks went down to a surprise home defeat in their latest league fixture on Saturday, as Essex side Rochford Hundred took the spoils at Dry Leas with a thoroughly deserved 27-24 victory.

The visitors, despite their lowly position in the table were good value for their win while the Hawks were disappointing, often lacking direction.

When in possession, Henley were often guilty of trying to force things too much which resulted in handling errors and although they claimed a bonus point by outscoring Rochford by four tries to three, two of those tries came in the last five minutes which distorted the scoreboard somewhat.

The injury list is ever-growing for the Hawks and another late withdrawal saw a return for veteran prop Jim Hadfield who put in a sterling performance for an hour.

The visitors started brightly and kept the Hawks pinned in their own half for the first 15 minutes.

When the Hawks got possession, they were under pressure and made unforced errors in trying to run the ball from deep positions. Eventually Rochford no 8 Maciu Nogabi opened the scoring for the visitors when he drove over from an attacking scrum. Chris Dudman converted.

Rochford increased their lead with a Dudman penalty before the Hawks got some momentum, creating a penalty which they kicked for the corner.

Following a forward drive, the ball went out to the backs and Cail Cookland crossed in the corner for the Hawks’ first score.

Henley were creating more pressure at this point with Will Bordill and Alex Bradley dominating the forward drives and Terence Barbarinsa and James Davies looking dangerous in the centre.

The Hawks took the lead just before the break due to a terrific run from Terence Barbarinsa who beat three tacklers before offloading to Alex Bradley who scampered 20m to score.

Cail Cookland converted to give the Hawks a slender 12-10 lead at half-time.

It looked as though Henley had weathered the storm and could win the game but Rochford had other ideas and started the second half well, keeping the home side in their own half, where again they were guilty of trying to force things too much. Wings George Wood and Reuben Norville did look dangerous when they got the ball but their chances were limited.

Rochford were a committed side who used their big forwards to good effect and as Henley struggled to get any momentum, the Essex side gradually gained control and scored 17 unanswered points in 15 minutes.

The visitors took the lead when Najee Mundicha crashed over for a try that Dudman converted.

A further penalty from Dudman and a try from Rochford wing Mark Billings gave the visitors a commanding 27-12 lead.

The Hawks kept trying to move the ball and managed to get within striking range of the Rochford line.

With Henley launching another attack, the referee had no option but to award a red card to Rochford’s Mundicha for an unfortunate high tackle.

With that, the Hawks rallied and showed some urgency to find two tries that gave them a try bonus point.

First from an attacking scrum when Alex Bradley again collected the ball from Barbarinsa for a simple run in for his second try of the afternoon. Then, in the dying minutes, replacement hooker George Inoke finished off a forward drive from an attacking line-out.

Cookland converted to show a close-scoring game. However, the end result was never in doubt.