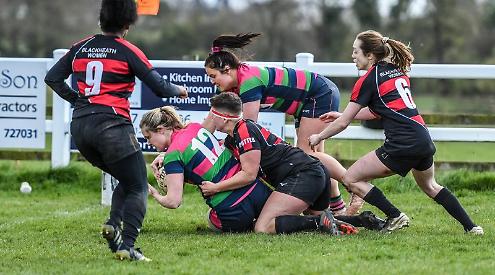 ABBEY WOMEN secured seventh place in their return season to Championship South Division 1 with an enthralling two point win against Blackheath Women in their final match of the season last Saturday.

Winger Hannah Skeels showcased her playmaking abilities with a series of snipes and breaks while prop Hannah Gale demonstrated the workrate she has displayed all season with strong carries. Centres Alice Denton-Rice and Kelsea Montgomery combined well in the first half, making scintillating breaks and important tackles.

It was an impressive performance also from the retiring club stalwart Meaghan Fowler, playing in the position she started in the inaugural Abbey Women team in 2013, exhibiting her storming runs.

Although Abbey stole the first points of the afternoon. Blackheath responded well and the score at half-time was two points in the visitor’s favour.

A fortunate bounce from a long-range territorial kick from their fullback Lyndsay Whitley saw their winger collect and face in for their first score. Blackheath had also threatened the home side’s try line and a series of strong pick and go attempts off the back of successive penalty advantages saw them cross the line yet again.

Undeterred, Abbey approached the second half knowing they could secure the win. Strong runs from Faux and her back row partners Annabel Hawkins and Abi Wall secured front foot ball for Abbey.

Scrum half Ellie Denton-Rice enabled quick ball and her out half partner Annette Bevan released the back line well. Eventually, after Blackheath saw a yellow card for a high tackle, Pullan grabbed her second of the afternoon with a short-range effort.

Although Blackheath bit back with another from pacey centre Iona McCusker, it was Abbey who then responded to nudge the score back in their favour. Another surge at the Blackheath try line, started by Joey Fowler, saw Skeels release Alice Denton-Rice, who crossed for her 18th try of the season, making her the league’s highest try and point scorer.

With two minutes left on the clock, Abbey knew they just had to retain possession. Two yellow cards for Faux and Skeels, who otherwise had enjoyed a fine afternoon, saw Abbey close out the game with 13 players but as Denton-Rice booted the ball into touch, the win was sealed.

This was a remarkable season for Abbey as they achieved their highest-ever finish in the leagues.

• ABBEY WOMEN 2nds also closed out the season with a 32-10 win against Windsor Ladies the following day to secure third place in National Challenge 2 South West East. A hat-trick from Jess Williams, as well as a brace from Jordanne McGregor and one try from Ezzy Ephgrave-Goddard secured the win.