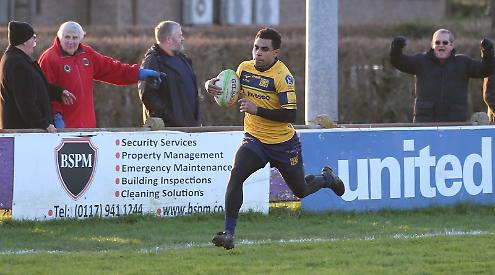 HENLEY HAWKS succumbed to a heavy defeat last Saturday to a well-organised Dings side who have reached a rich vein of form to complete a seven-match unbeaten run.

Once again, the early exchanges showed promise as some forceful attacks from Henley were held out by some desperate but well-organised Dings defence.

This brought multiple penalties, but Henley were unable to profit from this and as the home side broke from their own line they were able to penetrate better. A series of close quarter attacks saw a patient home side take the lead as they were bundled over from short range.

Henley responded well and took the game back to the hosts and from one such attacking scrum they were able to move the ball to their mercurial winger Reuben Norville who beat two men to score wide out. Unfortunately the touchline conversion from Cail Cookland fell just short.

With a scoreline of 7-5 it was game on and everything to play for after the first quarter.

The rest of the half was pretty even with both sides trying to attack from deep. However, it was Dings who were just that more clinical and that coupled with some uncharacteristic defensive efforts allowed the hosts to establish an attacking set piece from which their forwards were driven over to increase the lead to 12-5.

Again, Henley were back on the attack but thwarted at every turn by a resolute home side determined to ensure their line remained intact.

Terence Barbarinsa, in the centre, looked dangerous and was a constant threat to the Dings defence but lack of support at times meant the threat was quickly dealt with.

Some promising attacking mauls came to nothing as the Dings forwards cleverly prevented the drive by working their bodies often on to the wrong side of the maul.

The set piece was working well but Henley were unable to penetrate and make that decisive line break that might have made all the difference. As in previous weeks the hosts scored right on the stroke of half-time which was converted and slightly skewed the score line at the break.

It was clear that Henley needed to respond quickly to get back into the game and challenge once more. However, the first half seemed to have sapped the Henley resources and although the endeavour continued drop passes and defensive lapses allowed Dings to score three further tries and stretch their lead to 40 points at the end of the game.

It’s a long time since Henley have lost three games in a row. This in a season which had promised much with victories against all the top sides.