Reynolds hails side’s first half display in away win 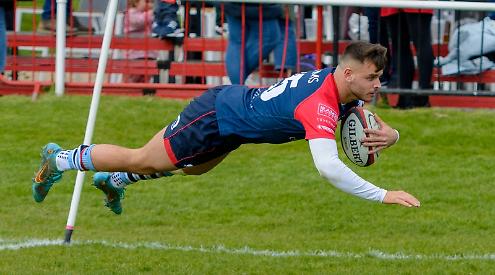 RAMS director of rugby Seb Reynolds was delighted with his side’s attitude after they beat Blackheath for the first time with a 29-17 National Division 1 away triumph last Saturday, writes Richard Ashton.

A majestic first-half display put the visitors 19-0 up at the break on the back of a Tom Vooght double and a try from skipper Robbie Stapley, Sam Nicholls adding two conversions.

However, the hosts rallied at the start of the second period, Jake Lloyd and Matt Collins touching down to cut the gap to nine points.

And while Marcus Kershaw grabbed a length-of-the-field interception try for the hosts, added to by Jake Hennessey, Humberstone’s last-play penalty sealed the deal.

With Blackheath fighting for their lives at the foot of the table and Rams realistically only trying to finish as high as fifth, Reynolds highlighted the desire of his side to put in a performance.

He said: “It was probably the most impressive thing. We knew they would be up for it because they are battling to stay up, it was their last home game and we’re in a position where we have to make sure we have clear focus on each game and don’t let things drift — it’s been a long season and you don’t want minds wandering.

“But everyone was really focused and I think the captain really helped with that. He demanded it on Thursday and before the game and the players really responded to that well.

“One of the nicest and most important things about rugby as a sport and this squad especially, is how tight-knit they are.

“They back each other and I think that was crucial in seeing out the game against a very good Blackheath side who came back well. We knew it was going to be a tough challenge because they’re a good side who have 14 losing bonus points, if they’d changed those results (into wins) they’d be near the top of the league, and they play some really good rugby, so I’m tremendously pleased.”

Rams’ first-half display in particular was outstanding and Reynolds added: “I thought the first 40 minutes was some of our best rugby of the season.

“We forced a lot of errors. We were creating opportunities by making them try and force the pass, and because they’re a very good attacking side they always wanted to try and do something, but we were able to catch man and ball or take them down.

“It’s a credit to the work (defence coach) Danny (Batty) has done in the last couple of years, over the season and in the past week — it was a huge emphasis in getting back to what we believe is a strength of our game and I commend all the lads for the effort and execution they put in.

“Strangely both sides played their better rugby uphill into the wind — we did in the first half and then they had a period at the start of the second — but we played some really good stuff which was typified by the guys coming in and especially the younger ones.

“I was really chuffed for Sam Nicholls on his second start to get the win, I thought Colin Thomson was excellent coming back into the side and Paul Englezos as well, so it was a good performance.”

Among the highlight in an excellent performance were the third and fourth tries, Vooght’s second coming from an intricate line-out play before Dykes’ effort came from some Hayhow magic, and Reynolds concluded: “We’ve been developing elements throughout the season and (forwards coach) Owen (Root)’s tried to put in a couple of things in during the last few weeks — part of that is trying to keep things creative as we finish the season — and it worked perfectly.”