Youngsters show promise despite depleted Bulls losing out to the Normans 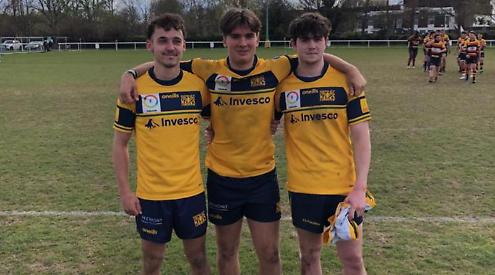 HENLEY BULLS, back in action after a number of weeks without a fixture, were short on numbers due to injuries and unavailabilities so the home side lent them two players for last Saturday’s clash.

The Bulls started with five 18-year-olds and two 19-year-olds — three of the 18-years-olds having been though the minis, juniors and colts with Henley.

The Normans scored early from powerful carries from their big forwards. The Bulls came into the game with Rhys Amos and Matt Mann leading a good defensive effort, forcing mistakes and allowing turnovers to happen.

The half back pair of Harry West and Jack Allison, both 18, then started to boss the game and were dictating where the game was being played.

The Bulls went close when Matt Crook got the ball in open space and used his pace to go around the defence before a neat grubber kick though the full back’s legs.

However, the bounce was not kind and the Normans cleared their lines.

Devon Lee at fullback was looking to counter-attack at every opportunity, as he beat the first defender and made metres.

Unfortunately the Bulls were punished for a couple of mistakes and found themselves 19-0 down at half time. Allison kicked off the second half and it was Henry Neal who made the first tackle and set the tone of how the Bulls were going to play.

George Jupp and Huw Evans were both able to get their hands on the ball more and were making effective carries along with captain Amos.

The pressure was all on the Normans with them having to defend well to keep the Bulls out.

The Bulls then scored a good team try, going through a number of pairs of hands, started by Lee and finished in the corner by hooker Lewis Strong.

West and Allison both showed more confidence in adapting to senior rugby and were making little darts, half breaks and keeping the defence honest. Amos, Inoke and Jupp added with strong carries to get the Bulls over the gain line. Crook, another player who had adapted to senior rugby, made a half break, only to be caught just short of the try line.

Neal and Evans with strong carries allowed West to get the ball at pace to Finn Glass where the prop produced a 20-metre pass from his left hand for the on loan Richmond wing to dot down.

Allison added the conversion from out wide to take the Bulls within a score of the host.

However, from the kick-off Normans forced a penalty and took a shot at goal to take the game away from the Bulls and make the final score 22-12 to the Normans.