Norville bags treble as side get back to winning ways 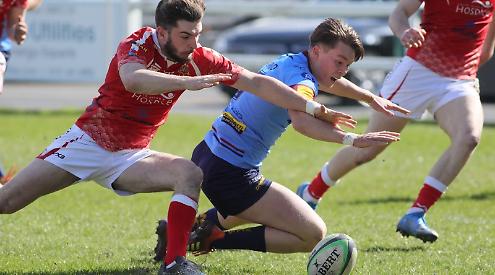 HENLEY HAWKS put an end to their poor run of form that had seen them lose three successive games last Saturday as they eased to a comfortable home win against lowly Barnstaple.

With several changes throughout the side, Henley were desperate to find some form again in the hope of finishing the season in good form.

Their visitors were on the back of a fine home win against Barnes the week before, so headed into the game with some confidence, despite their second-from-bottom league position.

However, it was Henley who started the game in exhilarating form. Winger Reuben Norville picked up the ball within his own half and spotting a gap in the Barnstaple defence turned on the afterburners with a scorching solo effort that saw him dot down in the corner.

Guy Rawsthorn’s touchline conversion fell just short, but the Hawks had certainly set their stall out to attack on what was a beautiful spring day, perfect for running rugby.

With the score at 5-0 after just a minute of the game gone, Henley soon found themselves back on the front foot. With the pack winning the forward collisions and the scrum back to its formidable best, it looked like it could be a long afternoon for the Devonian side.

Will Panday, making his first start of the season in the unfamilar position of fly half, doubled the score not long afterwards after sustained pressure in the Barnstaple 22.

With the Hawks now scenting blood, further scores from George Amphlett, a second from Norville, and one for the ever-present Sam Lunnon suggested that the home side were on their way to an emphatic win. The latter was started by a good break from Will Bordill, who cut a fine line through the Barnstaple defence before offloading to Lunnon to cross the whitewash.

With the score at 29-0 at the interval, it looked as if Henley could run up a cricket score on their beleaguered opponents. However, the visitors came out after the break with renewed purpose and were rewarded with their first score of the afternoon, with Arthur Marks powering over from close range.

The comeback was short-lived as Norville completed his hat-trick just afterwards and a further try from Panday cemented the Henley win. Given the inconsistency the Hawks have had at 10 this season, Panday gave a calm and measured performance, managing the game very well. The visitors never gave in and two further short-range scores from Marks completed an impressive hat-trick for the second row.

However, it was Marcus Lowe who finished the scoring for Henley to cap an excellent, and much needed all-round performance for the home side.