Hawks women hit back to secure place in final 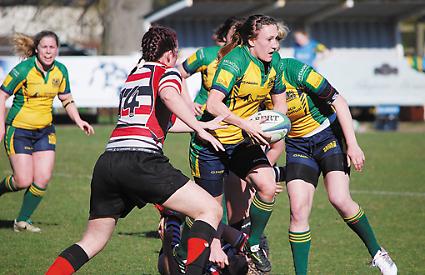 HENLEY HAWKS WOMEN maintained their 100 per cent league and cup record as they secured a place in the final of the Intermediate Cup with a 33-14 victory over Championship North League side Novocastrian Ladies at Dry Leas on Sunday.

Playing in front of a large crowd, the hosts started brightly when Hearn burst through on a well-timed run but a good scramble defence meant Henley were not able to capitalise.

Play then moved to the home side’s half and through a good break from the fullback, a following kick through caused a bouncing ball to land in Novo’s hands for a simple score under the posts.

The Hawks hit back by calmly working their way into the opposition 22. The phases were mounting and it would tell as Lynch put Wheeler through from a few metres out. With the kick it was now 7-7 and game on. Atkinson then won a fine line off Dudding to leave the cover for dead. From here in the Hawks never looked back as they were controlling the tempo.

With play taking place in the Novos’ half, further patient build up allowed Parry to cross in the corner. Half-time approached and the solid defence meant it finished 19-7.