Visitors hit back to sink below par Henley Hawks 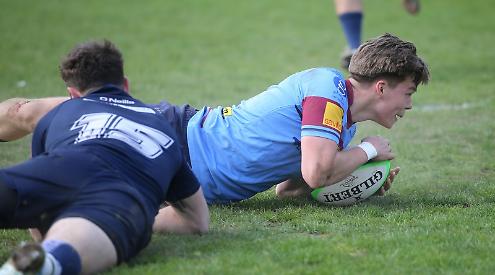 THE last home game of the season was a frustrating one for Henley Hawks as they crashed to defeat at the hands of Barnes in front of a good crowd of 525 last Saturday.

The Hawks were well below par and as the long, often challenging season comes to the end, there appeared to be little direction in their play.

They lacked game management at crucial times, allowing the visitors to build pressure. Barnes were good value for their win, outscoring the Hawks by five tries to three. They were a committed, well-organised side, who did the basics well and were well marshalled at scrum half by Josh Davies.

Barnes showed their intent from the start as they kept the Hawks pinned in their own half. However, it was the Hawks who struck first with their first visit into the Barnes 22. After a good turnover from centre Terence Barbarinsa, a good line break from Marcus Lowe saw Toby Gilbey on hand to scamper 20m to touchdown.

Shortly afterwards the Hawks extended their lead when a good forward drive was finished off by Hawks number eight Alex Bradley. Cail Cookland converted to give the Hawks a 12-0 lead.

The Hawks then allowed the visitors straight back into the game when they failed to deal with the restart allowing Barnes to exert pressure on the Hawks defence. After a number of drives, Barnes centre Jordan Souter glided through for a try. Henley almost extended their lead when a chip ahead from Cookland was gathered by George Wood who went for the line but the Barnes defence managed to scramble back. A yellow card was given to a player from each side following an altercation and from the penalty, Barnes kicked their way back into the Hawks 22. The pressure from the visitors saw Cam Leigh cross for a try which Rob Kirby converted.

The Hawks then turned down two kickable penalties which would have given them a lead at the break but they failed to take advantage from the line-outs leaving the scores level at half-time.

Barnes retook the lead shortly after the break. A Hawks attack broke down on halfway and Barnes’ Mathew Branfield picked up the loose ball and raced up the touchline, outpacing the Hawks defence to score.

Terence Barbarinsa was a constant threat for the Hawks and the home side replied quickly when some good interplay between Barbarinsa, Gilbey and Guy Rawsthorn ended with Sam Lunnon crashing over. Cail Cookland converted to regain the lead for the Hawks 19-17.

The rest of the match was dominated by the visitors whose forwards were committed while Kirby and Davies marshalled everything and kept the visitors in the right areas of the field. The Barnes backs were excellent at times with fine passing skills and pace. Barnes turned down a penalty kick at goal by their kick for touch only just made the Hawks 22. However, they executed an excellent driving maul, pushing the Hawks pack back some 20m before hooker Alex March claimed the try which Kirby converted.

As the Hawks floundered, Barnes added a fifth try, an excellent backs move which allowed Peter Weightman to score a try that Kirby converted.

To compound things for the Hawks, another lost attacking line-out resulted in Barnes running the length of the pitch and although the Henley defence got back, a resulting penalty was converted by Kirby to complete the victory and end a disappointing afternoon for the Hawks and their supporters.