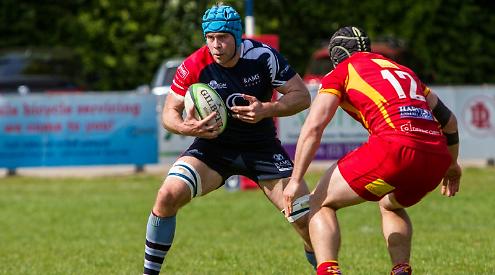 First-half tries from Connor Hayhow and Henry Bird, both added to by Steffan James, gave Rams a 14-0 interval advantage before they wrapped up the victory through skipper Tom Vooght and Hayhow with his second. James maintained his perfect record with the boot for 28-0, and after Cambridge got on the board with a converted Daryl Veenendaal effort, James nudged his side further in front.

An interception try from Ollie Monye — his first for the hosts — was followed by Hayhow’s hat-trick effort with the final play, James again on target both times to conclude a wonderful victory.

And with the hosts ending the 28-game season in sixth place, Reynolds thanked the Rams’ fans who helped produce something of a carnival atmosphere. He said: “I’d like to thank everyone at the club for their support — it’s been great to have rugby back and the place was really rocking on Saturday.

“The players have been outstanding, but equally, the support they get has been brilliant and we’re pleased to finish the season off in style.”

He continued: “We made the point before the game that while the last one of the season, it’s still important — you don’t want to let the campaign die out and go into the off-season wondering where you’re at.

“Our attitude was outstanding — there wasn’t much riding on the game, but we had a Cambridge team as one of the form sides in the league and we produced one of our best performances of the season.

“When things come together we can be a very good side, but what we’ve got to remember as a club is this is our first full season in National 1. The first time during the pandemic it was cut short by five games, so this is the first time we’ve done the whole thing and the players have been outstanding.”

A feature of the victory was the way Rams neutralised the Cambridge rolling maul, which had led hooker Ben Brownlie to top the divisional try-scoring charts with 27 scores.

And Reynolds admitted: “We had to look at what Cambridge have been doing well and their maul is arguably the most destructive in the league, so we had to try and come up with a way to take their super-power away from them and thanks to Owen, we managed to do a good job.

“Most importantly, though, the players had to execute it under pressure, so they did really well.”

In terms of Rams’ leading marksmen, Bird and Vooght finished joint top with 14 and Reynolds joked: “As much as I was trying to engineer it for Birdy to Tom’s annoyance, it’s probably fitting they drew.”

Other superb performances came from the captain’s back-row colleagues Vince Everitt and James McRae, while Hayhow’s treble meant he finished the campaign with 12 tries and reached the 100-points mark for the club.

Reynolds concluded: “Vinny’s got better and better as the season has gone on, and in hot conditions, it being firm under foot, it was really helpful to have two No. 7s on the park – and the elder statesman, Tom Vooght, also looked as youthful as ever.

“We challenged Connor when he joined to improve on a couple of things and that was hard, because he’s been in a profrssional enviromonemt.

“Essentially he’s dropped down to National 1 and suddenly your coaches are saying, ‘this is what you’ve got to improve on’, you have to take it on board and he’s been brilliant. He never misses a training session and is always looking to develop.”