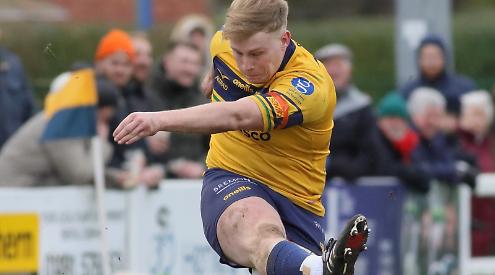 HENLEY Hawks completed their season with a disappointing loss away in St Albans on Saturday.

In perfect conditions and on a hard dry pitch the early exchanges were even. Unfortunately, the Henley error count was too high and this gifted the hosts some early opportunities.

It wasn’t long before these errors, particularly in the line-out, allowed the hosts to build a 12 point lead without really breaking sweat. Pressure was built close to the visitors’ line and in the end sheer numbers ensured that two tries were scored within the space of 15 minutes.

To their credit Henley fought back bravely and with their first attack showed what they were capable of given sustained pressure and being able to hold the ball multiple phases.

A good line-out was won some 20 metres out and a good drive by Alex Bradley led to a series of pick and goes from the forwards before the ball was fed to George Amphlett in the midfield who dived over close to the posts for Cail Cookland to convert.

With the score line of 12-7 to the hosts this was Henley’s opportunity to build back into the game and start to pressurise the hosts.

A good break by Terence Barbarinsa saw the Henley winger slip past two defenders but he was unable to get the ball away to the supporting players which almost certainly would have resulted in a try. However, Old Albanian were able to break away and secure field position down field. Then came the decisive moment in the game as defensive lapses allowed the hosts to score 14 points in the space of four minutes. The second try being right on the half-time whistle and Henley were clearly shocked.

However, the visitors came out in the second half determined to perform in the final 40 minutes of the season and the early exchanges looked positive as they took the game to their opponents.

Unfortunately this pressure didn’t produce the desired score and once again the hosts were able to go back upfield and score a relatively straightforward try to make it 31-7.

To Henley’s credit they battled hard to get back into the game and reduced the arrears to 31-12 with a well-taken try from James Davies following a good line-out move. Once again Henley were back on the front foot and a series of punishing drives saw the Henley College flanker take a good line to crash over for his debut try for the Hawks.

At 31-19 it looked as if Henley would at least get a bonus point for their efforts. Once again, they pressurised the Old Albanian line but a loose pass was intercepted and the home side’s centre ran the length of the field to give the score line a slightly disjointed appearance at 38-19.

The game then petered out with Henley once again attacking but losing possession at vital stages, Old Albanian cleared their lines and the referee blew his whistle on a long and ultimately disappointing season for the Hawks.

This has been a tough campaign in many ways with unprecedented injuries and a hugely difficult start to the season. Henley were the only side to do the double over champions Esher and have beaten all of the top four sides. Unfortunately, the last six or seven weeks has taken its toll in many ways.

However, the planning for next season has begun in earnest with Henley determined to attain success in National 2 South next season.