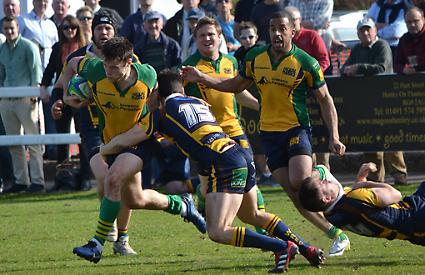 Going into the game just a point separated the two sides who are both battling to avoid the drop back into National 2 (South) after both gaining promotion last season.

The result was in doubt until the very last seconds of play. The Hawks, who had the lead for the whole of the second half, were having to defend desperately to secure a vital victory as Worthing battered away on their line for the last 10 minutes of play.

An heroic defence in which the whole team tackled with determination managed to hang on to a 21-16 lead which they established just eight minutes into the second half, the lead having changed hands four times before this.

The Hawks were rocked just five minutes into the game when in an attempt to run from 10 metres inside their own half speedy fullback Liam ONeill was caught in possession. The Raiders quickly turned possession into a counter attack and moving the ball left to wing Ben Loosemore he was able to race in from 40 metres with the home defence fragmented.

Henley then settled into Raiders territory. After an early dominance in the scrum the Hawks were not able to maintain this. Good line out ball backed by their free swift running backs enabled them to put enough pressure on the visitors defence to enable the reliable boot of fly-half James Comben to put them a point ahead through two penalties at 6-5.

Although Kiba Richards at centre had to be nailed effectively before he got in his stride, the Hawks backs showed the greater potential to score tries. However, they were shaken when a scrum which had seen the Raiders under pressure quickly evaporated when scrum half Jordan Burns picked up a loose heel to race down the wide blind side with a rare turn of speed to leave the Hawks cover stranded. Although fullback Matt McLean could not add the conversion points he had been successful with a penalty a few minutes earlier which left the Hawks trailing 13-6.

The hosts urgently needed to retaliate. They did so thanks to the graft of their forwards who established authority through their effective driving mauling. This gave James Comben the chance to kick his third penalty. They then added further points on the cusp of half time when they drove the Raiders back over their line and Matt Payne secured a touch down. This was turned into seven points thanks to a fine conversion by Comben.

The Hawks backs pace had stretched the Raiders defence in the first half and in particular that of Xavier Andre and ONeill who had raced through on a kick ahead to be thwarted when the ball went over the dead ball line as he dived to touch down.

The Hawks combination at half-back of Comben and Ollie Frost had kept the Raiders fully occupied and it was this that created a vital second try two minutes into the second half. Frost broke wide from a set scrum down the blind side. A probing grubber kick which bounced kindly for Comben, who touched down near the corner flag for his 16th point of the match, which earned the man-of-the-match award. The conversion went wide.

The game seemed certain to swing the Hawks way after this when on 55 minutes the Raiders most effective forward Rob Smith was sent to the sin bin after 55 minutes for a deliberate knock with the Hawks 10 metres out. Smith had been instrumental in earning turnover ball in maul situations by holding the Hawks possession up.

The Hawks were unable to profit from his absence. Despite the speed of their backs they were unable use this to advantage and lacked patience to create scoring opportunities. It was Worthing that had added to their score with a McLean penalty from in front of the posts after 48 minutes whilst Comben had the misfortune to hit an upright.

With Smiths return to action with 15 minutes to go the game was ripe for a pulsating finish. The Hawks resolve was fully tested as Danny Wells put in a thunderous tackle to stop dead one Raiders charge while ONeill put in a try saving tackle on flanker James Chilsholm. These were cameos of defensive resolution.

The Hawks stoic resistance was further tested when Josh McNally was sent to the sin bin with under 10 minutes to go. Worse was to follow when ONeill was given similar notice to quit.

Down to 13 players the odds of a Hawks victory were fast diminishing. However, the Raiders faltered under pressure and the Hawks awarded a penalty for back chat to the referee with the game now in injury time enabled them to end their game with a kick to touch.

The Hawks secured another step towards life in the Division 1 next season. They have achieved three victories in four games but their fate may well be in the hands of the other relegation candidates.