Writing on the wall for Abbey after suffering late setback 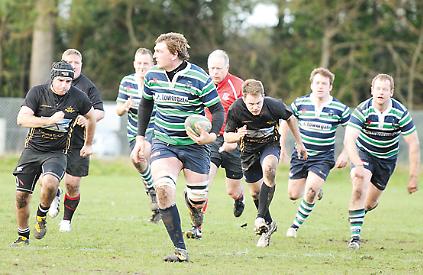 ABBEY, who looked likely winners for much of the game, fell apart badly in the latter stages of their match with Drifters at Rosehill on Saturday, eventually going down by three points, writes Mark Hoskins.

League results elsewhere mean that Abbey are now all but relegated from Southern Counties North. To move out of the bottom two they need to win their remaining two matches with at least one bonus point and hope that Wallingford, who have two games in hand, register no more points at all.

Abbey took the lead after five minutes when fullback Tom Waterhouse kicked a penalty. Flanker Dai Garhard then launched a promising attack as Abbey sought to build on their lead, but the home side was guilty of kicking possession away and Drifters soon equalised when winger Ollie Ashton put a penalty over.

The visitors suffered a blow when scrum half Tom Heeks was injured after 10 minutes, and in the resultant reshuffle of the backs influential captain Dan Lake moved from the wing to scrum half. The Drifters’ backs began to threaten, but Abbey hooker Mark Toland did well to steal the ball in his own 22. However, another kickable penalty was conceded, and Ashton obliged to give his side a 6-3 lead.

Abbey went back on the attack with a driving maul and shortly afterwards Drifters suffered more injury misery when hooker Tim Bailey left the field. Sam Hallett and Waterhouse continued to launch attacks inside the visitors’ half before scrum half Arron Ross elected to tap and go from a penalty. This resulted in outside half Callum Wylie and centre Dan Love both being stopped just short of the Drifters’ line, but Hallett was able to pick up and drive over for a try just to the right of the posts. Waterhouse’s conversion put Abbey 10-6 up after 32 minutes.