Hosts pile on the pressure to gain last minute victory 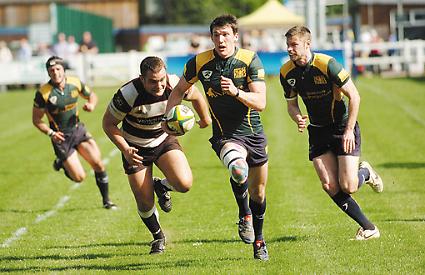 HENLEY HAWKS’ survival hopes took a knock on Saturday as they suffered defeat at Blackheath in an evenly contested National Division match.

The closeness of the game was illustrated as the lead changed hands four times and the result was not decided until the last minute of the match.

The Hawks had taken the lead at 18-15 when fly-half James Comben kicked a penalty from in front of the posts with six minutes remaining. It was a feature of the Hawks’ performance throughout the match that they could not control the game and maintain possession whenever they took the lead.

As the clock ticked away they took play into the Blackheath 10 metre box on halfway when they conceded a penalty at a scrum which their fly-half Simon Whatling kicked to within 10 metres of the Hawks’ line. The hosts then amounted a do or die drive with the assistance of four of their backs. Although the Hawks pack throughout the game had more than held their own in all aspects of play they could not prevent Blackheath surging forward for flanker Dave Allen to touch down his 19th try of the season. With a conversion by Whatling the hosts led 22-18 and with just a minute of the game remaining Henley could not reply.

The Hawks had taken a 3-0 lead after just six minutes thanks to a Comben penalty. Immediately after this the Hawks attempts to build on this score were thwarted by some heavy duty tackling by the home side. Blackheath established themselves in the visitors’ 22, switched their attack from forward drive to their backs and some swift passing caught the Hawks out of order and centre Richard Windsor slipped through the centre with the aid of a strong hand off which, with Whatling’s conversion, put them 7-3 ahead.