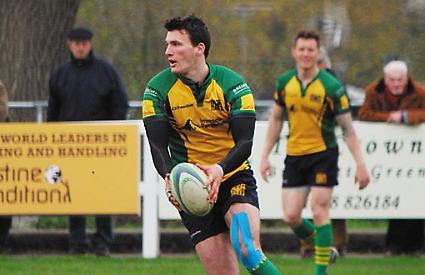 IN A pulsating finish to the game that decided which club would avoid relegation to Division 2, the Hawks were inches away from securing the four points to keep them in Division 1 next season in the final minutes of the game at Corbridge on Saturday.

The Hawks had the better of a strong breeze at kick-off but it was the home side who started with all guns blazing.

In the first five minutes they gained some useful quality possession which they quickly used to put wing Sep Vasser and flanker Matt Charters away down the left wing to beat the Hawks defence on the outside to what appeared to be to score tries. However, on each occasion the assistant referee flagged for a foot in touch.

The Hawks recovered from this onslaught and with some useful kicking by fly-half James Comben to make use of the favourable wind play went into the Tynedale half.

The home side, on receipt of these clearance kicks, helped to put the Hawks back in the game by punting the ball back to them. The Hawks made use of forward drives to establish themselves in Tynedale territory.

The new partnership between the Hawks centres Danny Wells and Ed Yarton began to take shape. Yarntons elusive running helped the Hawks keep the Tynedale defence honest whilst Wells, although not able to put Comben through with short flat passing, tackled the home side relentlessly.

Whilst scoring opportunities were not readily created with the ball in hand Tynedale became stretched in defence to such an extent that they began to leak penalties for handling on the ground and not releasing players in the tackle.

Although Comben missed the first attempt to open the Hawks scoring, for crossing, he used the wind effectively to kick penalties from 35 metres in the 23rd and 28th minutes.

At this stage it appeared likely that Hawks would have the comfort of a 6-0 lead at half time. However, the game took a turn when the home side took a tapped penalty on the ten metre line and advancing into the Hawks half hooker David Nelson put in a strong run bursting through a tackle to set up a passing movement towards the left touch line where flanker Dan Temm forced his over for a try which unconverted made the score 6-5 in favour of the Hawks at the break.

The Hawks started the second half brightly and a likely over lap was not exploited when Tynedale intercepted a pass. The Hawks were not able to use line out ball effectively as in recent games but prevailed in the set scrums.

As in recent games flanker Ryan Newman was effective in stopping Tynedale developing attacking moves with consuming tackles and he was now supported well by replacement Ben Ashmore in this respect.

Newman made progress with a break down the left but supporting passing was poor. Tynedale took the lead for the first time with a penalty by fly-half Gavin Beasley after 51 minutes.

The Hawks were now beginning to dominate possession as the game was now played predominately in Tynedales half. They mounted repeated attacks and Josh McNally and Robbie Stapley were held up.

This pressure gave Comben the opportunity to kick his third penalty and restore the Hawks lead in what was increasingly becoming a ding-dong struggle and Beasley was able to counter this with his second penalty after 61 minutes.

Although Comben sent a further penalty wide the Hawks hopes of gaining a winning lead rose when Yarnton, the most effective broken field runner in the game, made a run from half way before being stopped 20 metres from the home line and their defence managed to scramble away the threat after his off load to supporting runners.

It was against the run of play that Tynedale took the lead which swung the game their way when from 40 metres out Beasley dropped a goal out of the blue.

With score at 14-9 the game was slipping away from the Hawks. They launched a good attack from right to left through half a dozen pairs of hands to give Christoph Bart the chance to squeeze in for a try near the corner flag to level the scores. However, from the widest of angles Combens conversion into the wind fell short.

With 10 minutes to go the Hawks were now hammering away to get the score to decide the relegation issue. Their forwards were held up twice over the line and on a third occasion McNally was unable to touch down with the ball available.

Tynedales desperate defence led to offences and on 80 minutes Charters was given a yellow card for collapsing a Hawks forward drive.

In the dying moments two penalties were conceded but the Hawks were unable to control the ball from line outs which they chose to take rather than trying to convert from close to touch into a difficult cross wind.

Tynedales joy at the final whistle was more than matched by the frustration of the Hawks who were the better all round side on the day.