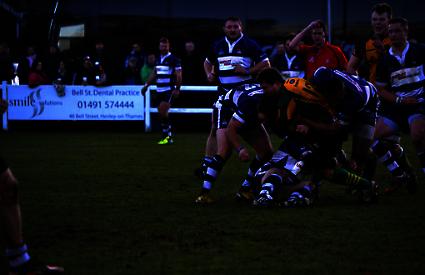 The hosts conceded 12 penalties to three in the first quarter of the game.

Although Hodgson only had the opportunity to convert three of these into points to give his side a nine point lead during this period, the Hawks indiscipline was crucial against a team in the top six of the league.

This poor start to the game by Henley reflected in a disorganised approach to the game in general. They were fortunate that Coventry were not able to take advantage of their resultant dominance and they failed to take the most of scoring opportunities as a result of unforced errors.

The Hawks again suffered from an inability to win ball on their own throw in the line outs and during this early period were under pressure in the set scrums losing one put in against the head.

The Hawks were handicapped by the issue of a yellow card to former Coventry prop Dai Maddocks after 22 minutes after a team warning for repeated offences.

The disadvantage of playing with a man short in the forwards soon disappeared when lock Dan Wright was also dismissed for obstructing Hawks fly half James Comben as he followed his own kick ahead.

For the first time in the game the Hawks had a controlled scrummage and with the experienced James Hadfield, also formerly at Coventry, now at loosehead, he produced a controlled heel to enable the Hawks to run the ball for the first time in the game through their backs across field. Liam ONeill, appearing on the left wing, gathered a difficult ball to use his pace to score in the corner. Comben converted with a fine kick close to touch.

The Hawks started the second half just two points in arrears and were now playing with more confidence. They began to use the ball in hand with some promise and they were now able to drive Coventry back also in the set scrums.

Such was their advantage with Hadfield now at loose head for much of the half it was they that dominated the scrums by and large and the Hawks could consider themselves unlucky not to have been awarded penalties on three occasions when the Coventry back five were on their feet to stop the Hawks surge.

Some promising play in the backs, which featured a good reverse off load by Comben, led to the Hawks reducing the deficit again to five points after Hodgson had previously kicked his fourth penalty when Comben made the score 12-10 with a penalty from a difficult angle.

The Hawks now looked to have it within their grasp to secure at least a losing bonus point against a Coventry side which seldom threatened to score a try.

However, this valuable point was denied them in a catastrophic last four minutes of the game. For the first time in the second half they were under pressure from the visitors.

They did have the benefit of a failed penalty attempt by Hodgson, his first failure in seven attempts, all of which were from in front of the posts.

Indiscipline cost the Hawks the game as they gave away two penalties close to the posts. First when Liam Dwyer was given a yellow card and then three minutes into injury time for illegally holding on to the ball. This presented Hodgson with the simplest of chances to give his side an 18-10 victory.