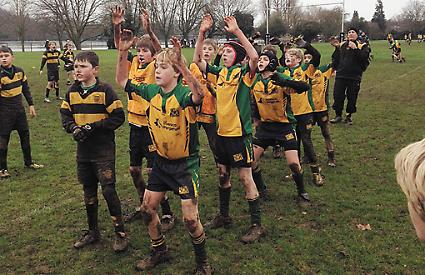 The wet conditions didn’t suit Henley’s game which is based on their speed and handling skills, so the packs had to dig deep to overcome strong and larger opposition.

Strong running and rucking from Morgan MacRae and Max Nugent in particular shone in the A side while Seb Marks and Gian Verdding dominated the break down in the B fixture which ensured quality ball for their backs.

James Langston and Hector Elrington had too much fire power in the centres and they controlled the A fixture creating space and field position for the back three of Harry Haigh, Adam Porter and James Sarney who ran in several tries throughout the game in their 35-5 win.

With fast ball being delivered well to the B team back line Josh Le Beigge and Olli Corbett controlled their lines well, with straight running and crisp passing, and strong running out wide from Ed Roy and Sam Jarvis in particular resulted in a 30-15 victory.