Hawks have no answer to London Welsh 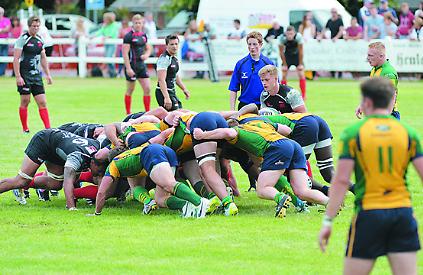 THE final score from last Saturday’s friendly spells out clearly the position of the two clubs in the rugby hierarchy — London Welsh newly promoted to the Premier Division, the Hawks four divisions below them having been relegated to Division 2 South at the end of last season, writes Noel Armstead.

The crowd of more than 600 at Dry Leas enjoyed an open, fast flowing game which the hosts learnt from. The Hawks were not demoralised by the margin of defeat for although they were 50-0 down at half-time, conceding eight tries and five conversions, the game became more closely contested in the second 40 minutes and it was 27 minutes before the visitors scored again. London Welsh added their second converted try of the half in the closing minutes to register 64 points. At the start of the game the Hawks found it difficult to take play out of their own territory and conceded two tries to lock Ben West in the first eight minutes as the visitors led 12-0.

When the hosts got possession they could not retain it. This was not because they kicked it away for they maintained the strategy which they adopted the previous two seasons of running the ball out of defence. They were hard pressed to break the Welsh defence and the turnover ball which resulted gave the visitors the opportunity to develop scoring opportunities.

London Welsh capitalised on these to such an extent that six of the eight tries in the first half came from Hawks mistakes in handling and only the last two were created by them in the last five minutes of the first 40 minutes.