Hawks lose out to Cinderford in crunch match 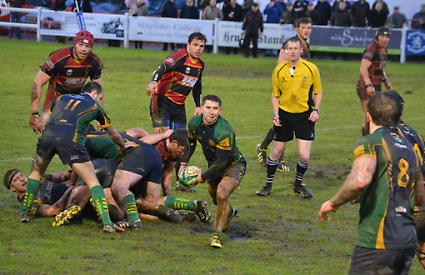 HENLEY HAWKS suffered a disappointing defeat when they went down 12-5 at home to lowly Cinderford on Saturday.

A blustery wind greeted the teams at the start of the game. Cinderford looked well prepared and played with determination which put the Hawks on the back foot. Throughout the game they had the measure of the Hawks forwards who were slower to breakdowns and rucked more effectively turning over the Hawks' possession and robbing them in the tackle.

The visitors controlled possession by strong effective tackling and rucking. They soon turned this to effect when from a line out they drove over for a try by Tom Buzzard after 18 minutes taking advantage of the absence of Hawks number six Luke Allen who had been sent to the sin bin four minutes earlier. This try was converted by fly-half Mark Davies in the difficult windy conditions. The Hawks came into the game with some handling movements by their backs but were thwarted by a good defence and handling errors in the tricky conditions. They found it difficult to retain possession against a strong physical pack and were also turned over by a number of penalties conceded when in possession at a ratio of 2:1.

The visitors however shunned the opportunity to kick penalty goals from attacking positions and there was not one attempt to kick at goal throughout ou the game by either side. Despite being one man down from the start of the second half with prop Chris Bundy sidelined in the sin bin Cinderford still denied Henley possession. Soon after his return they again demonstrated their ability to turn over possession when a Hawks' attack down the right ended when replacement wing Sam Baker broke away on a run of 40 metres which fully stretched the Hawks defence and successful rucking near the posts was switched leftwards for lock Lance Randall to crash over for an unconverted try to make the score 12-0.

There a blackened sky heralded by a ferocious wind with such hail and rain that the playing area was obliterated with a corner flag hurtled towards the half-way line. Although the playing surface was submerged with water in places play was continued after an eight minute suspension.

When the game resumed the Hawks had their best period of play and James Combden at fly half put in some effective kicking to keep play in the Foresters territory. The Hawks had, at times, put in some useful driving mauls and on winning a line out 20 metres out drove successfully to the line for Robbie Stapley to score to make it 12-5.

The Hawks looked to have secured a bonus point and this inspired them to play their most aggressive rugby of the game. Replacement centre Tom Allen was stopped about ten metres out after a run of 20 metres. This was followed by two penalties which were conceded by the visitors under the severest pressure they had experienced in the game.

Another Hawks' drive for the line from a line out, supported by two backs, was stopped when Cinderford lock Lance Randall was given a yellow card for illegally bring down the maul. The visitors were relieved that the referee did not think it worthy of penalty try which would have given the Hawks the opportunity to draw the game with a straight forward.

As a result of this game the Hawks are now 11th in the league with 41 points with three clubs behind them on 37 points including Richmond who they travel to this coming Saturday.