Hawks go top of the League 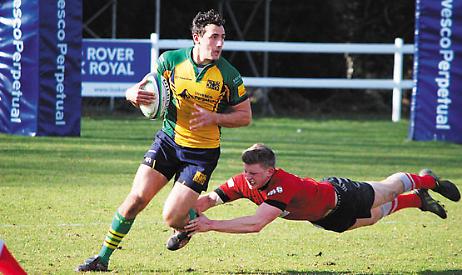 The visitors dominated the game in the first half to such an extent that the home side only managed to take the game into the Hawks half on one occasion. That was after 20 minutes when they scored a penalty through fly-half Brad Barnes from 35 metres.

The first 10 minutes was played almost entirely in the Lydney 22 metre area. During this time the Hawks failed to cross the Lydney line as the home side were well organised in defence, tackling effectively, coupled with the visitors failing to sustain their frequent passing movements due to failure to retain the ball in the tackle.

Henley eventually crossed the line when fly-half Ed Yarnton, who was the most penetrative of the Hawks backs, stepped inside a tackle to feed centre Simon Perry to score near the posts for him to convert.

The combination between Yarnton and Perry was the lynch-pin of other scores. Perry, who was promoted from the Bulls, supported Yarnton effectively.

It was the forwards who created the next try just three minutes later when they put in a strong driving maul which Lydney could only stop illegally by dragging it down. Yarnton kicked the straight forward conversion to make the score 14-0 after 18 minutes.

The Hawks were able to sustain their attack in the home 22 with the benefit of good line out play largely due to the pin-point delivery of hooker Stuart Philpott.

They could not turn this into points despite a good break from the back of the scrum 35 metres out by scrum-half Mark Bruce, which was unsupported, until 30 minutes when a flowing handling movement saw the ball moved from left to right and Perry score his second try. Yarnton converted to put the visitors 21-3 ahead.

The Hawks now striving for a bonus point try continued to move the ball at every opportunity and right wing Xavier Andre went close before being tackled on the corner flag and there were a number of scoring chances which went begging because of knock-ons.

The Hawks started the second half in a positive mood and another combined move sweeping down the right between Perry and Yarnton ended with the fly-half taking a pass close to the line from Perry to make the score 26-3.

Lydney then started to come into the game which they could not do in the first half. A long break from half-way saw fly half Brad Barnes score near the posts which he also converted.

With 50 minutes gone the Hawks began to use their substitutes which brought about the introduction of Connor Murphy at scrum half. His long raking passes from set-pieces gave the backs more space but his first effective contribution was to kick a straight forward penalty to make the score 29-10.

Murphys place kicking was a feature of the second half and the next opportunity came when the forwards drove the hard working flanker Tom Hall over in the corner for a try which he converted to make the score 36-10.

Lydney, being without number eight Liam Jackson having received a yellow card by referee James Clarke at the end of the first half, for the first time took the game to the Hawks line and their pack drove over for lock Dave Bennett to be awarded a try which Barnes converted.

With less than five minutes of the game remaining the hosts now had their best moments of the game despite being without the services replacement Jordan Fowke who had been awarded a red card for head butting and looked to be developing a promising move down the right. However, a fumble on half way led to the Hawks sweeping towards their line who then promptly finished the game from a tapped penalty which was worked to developing centre Barnes to touch down. Another Murphy conversion made the score 43-17 on the final whistle.