Robinson shines as Hawks march on 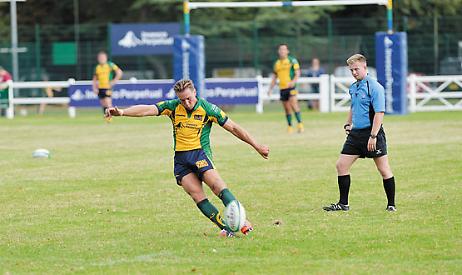 HENLEY HAWKS maintained their unbeaten record in National Division 2 South as they triumphed at Clifton on Saturday and in doing so have now won their first four away matches in what is a highly competitive league.

The Hawks were able to do so because their defence was well organised and powerful in the tackle, restricting the home side to one effective break from which they scored their only try of the match.

Fly-half Will Robinson also put a top class performance as he scored 15 points by way of two penalties and two conversions and an outstanding try after 14 minutes.

The Hawks, who were the better side in the set scrums throughout, heeled well on the Clifton 22 and scrum-half Connor Murphy put his half-back partner away on flat pass which he ran onto at pace and proceeded to run through the Clifton defence by means of a dummy and side steps to touch down under the posts. Robinson then converted his own try to put the visitors 7-0 ahead.

At this stage of the game the visitors were well on top and had plenty of possession and the good support they brought with them to the game were anticipating a handsome victory. They were further encouraged when they doubled their score seven minutes later. This came by an impressive burst down the left wing by new signing Jake Randall, from Llanelli Scarlets Academy, which although stopped just short of the Clifton line, led to a try by prop Dave Manning impressively well up in support. Robinson converted from a wide angle to make the score 14-0.

There was no further scoring before half time. The Hawks fell foul of referee Claire Hodnetts whistle which prevented them inposing periods of pressure on the Clifton defence and likewise also their failure to command the ball in the line outs on their own throws. Although their speed of foot gave them attacking opportunities they failed to finish several promising movements. They lacked in attack the co-ordination they had in defence.

The Hawks were without patience to develop their attacks to a conclusion and the reason for this may well lie in the lack of consistency in selection, there being seven changes in the starting line-up from the previous game against Cambridge which they won 37-0.

This is not due to a selection frenzy but because players are not available not only because of injury but, for example, of the nature of dual registration with Wasps, which gives them priority for selection.

Clifton came in to the game much more in the second half and it was then that Robinsons management of the game came into evidence with a mixture of long raking left foot kicks to drive the home attacks back on occasions or attacking punts to create advances into Clifton territory. The former were very important after the home side at last stretched the Hawks defence to such an extent after a series of forward drives in their 22 that wing Lucas Slovik was able to break through to score a try that was converted by fly-half James Mackay to make the score 14-7.

The Hawks immediately established themselves in the Clifton 22 and were awarded a penalty for off side in front of the posts which Robinson converted to give the visitors a 10 point lead at 17-7.

They were soon under renewed pressure when number eight Robbie Stapley was given a yellow card for preventing the release of a ball in a ruck. Clifton decided to press home their numerical superiority by opting to take line outs rather than kick penalties. They lost attacking line outs at this stage by failing to thrown in straight.

The Hawks were now under pressure in mauls, scrums and rucks. It was then that Will Woodward, playing in the second row with Matt Payne not available, put in some hard grinding work in the engine room of the scrum alongside skipper Dave Clements.

The Hawks did manage to mount counter attacks which featured Ed Yarnton and replacement Dan Barnes but in the last quarter the only further score came from a second penalty by Robinson making the final score 20-7.