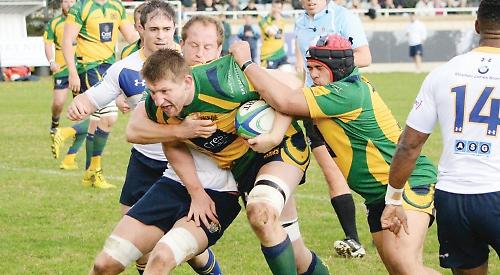 HOSTS Henley Hawks put in another spirited display on Saturday, this time against Old Elthamians where they matched their previously unbeaten opponents for most of this game.

But again, mistakes and indecision cost the Hawks at crucial moments and when the visitors had a sniff of a chance, they were clinical and eventually gained a bonus point win. Despite opportunities, the Hawks came away with nothing for their efforts.

Henley enjoyed plenty of possession but lacked direction and a cutting edge that could have provided a platform for victory and although the Hawks were always in contention on the scoreboard, the visitors won comfortably in the end.

In the first minutes, Old Elthamians showed their intent, when they broke the Henley defence in midfield and a long pass from Tom White allowed winger James Golledge to score in the corner unopposed. The conversion was missed by White.

The Hawks then enjoyed a good spell with skipper Dave Clements leading the forward drives, supported well by the back row. The visitors infringed a number of times trying to stop the Hawks momentum but eventually, Henley’s stand out player George Jackson took a quick penalty and scored near the posts. He converted his own try to give the Hawks the lead.

However, it was a quick and easy reply for the visitors as a lack of concentration by the Hawks allowed a simple inside pass for Michael Denbee to break clear and feed prop Lewis Brown who scored near the posts. White converted.

Henley reduced the arrears with a Jackson penalty before another mistake gifted the visitors their third try. With Henley looking to attack, a chip through from James Comben was blocked and unfortunately for the Hawks fell to Golledge who scampered 40 metres to touchdown.

To their credit the Hawks responded positively with Hyde, Hall and Morrison dominating the breakdowns with great commitment. They won a penalty which Jackson converted. The teams were evenly matched at this stage but a break by Connor Hayhow and Alan Awcock almost produced a score for the Hawks but the speed of the attack meant there was not enough support to keep it going.

The visitors were quick and fluent on the counter attack and were thwarted only by some strong defence led by Connor Hayhow.

The Hawks scrum, dominant in recent weeks, was under pressure throughout and gave a penalty chance for the Old Boys which White converted to give his side a 20-13 lead at the break.

The Hawks reverted to tactics that have served them well in the past and levelled the scores straight after the interval. Tom Hall led a driving maul that gained at least 25 metres before the visitors stopped it illegally giving the referee no option but to award a penalty try. Jackson converted to level the scores.

Renewed optimism didn’t last long for the Hawks as Elthamians replied with a try by Dominic Lespierre following a good attack. White converted.

The Hawks had another driving maul halted just short of the line from which the visitors were reduced to 14 men and despite having plenty of possession, the Hawks couldn’t find a way to break through the visitors’ defence. With no cutting edge, they started to chase the game from the wrong areas of the pitch and made several mistakes. In trying to run from their own 22, they conceded a penalty which White converted to extend the lead to 10 points.

With two minutes to go, the Hawks had a penalty opportunity which would have given them a bonus point but they elected to kick to the corner and from the resulting drive, the ball was spilled which allowed the Old Elthamians to clear and see out the rest of the time for their victory.