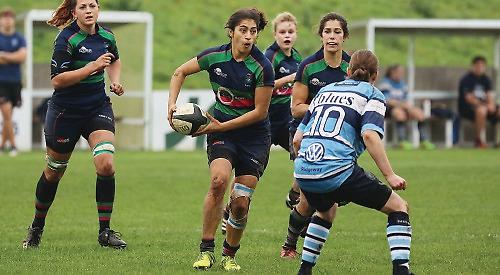 ABBEY NUNS produced a gusty 22-5 win over Newbury in a top-of-the-table clash at Rose Hill on Sunday.

Dave Swan’s side now sit 10 points clear of their Berkshire rivals, who put in a valiant performance but came up short.

The match saw a welcome meet to Newbury flanker Meg Horwood, who represented the Nuns for sevens in the summer and was effective in spearheading early passages of forward play, whilst Abbey’s own struggled to find their shape.

The Nuns broke the deadlock when scrum-half Ellie Rice, back from an injury, cleverly exploited a gap on the blindside before feeding flanker Hollie King, who powered over the line.

Returning inside-centre Abi Wall, who enjoyed a camp with Ireland Sevens over the summer, broke the defensive line before offloading to fly-half Annette Tomas who crossed over for Abbey’s second.

The second half saw better forward play from the Nuns, with new second row combination Harriet Driver and Natalie Mitchell combining well. Natalie Bow and Letitia Maybanks equally looked effective at the back, with Bow producing an outstanding try-saving tackle.

When Newbury were penalised for consistent illegal rucking, Tomas tapped it quickly and capitalised on a standstill Newbury defence, racing down the wing to score.

The opposition responded with a prolonged period of possession deep inside Abbey’s half and eventually got off the mark to score in the corner and make it 15-5.

It was the Nuns, however, who had the final say. Denton was clinical in ensuring that the Abbey’s countless phases of deep attacking play culminated in another try, using her strength and speed to cross the line. The number 13 then converted when it mattered, denying Newbury a losing bonus point.