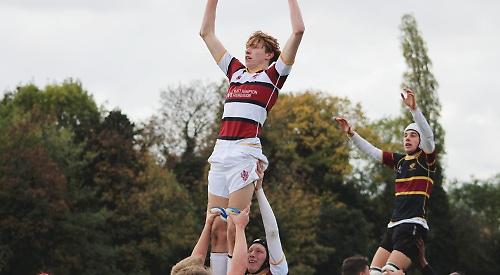 SHIPLAKE COLLEGE sides have chalked up four wins in their recent matches.

The opposition were put under pressure from the attack and when they did have the ball, they found the Shiplake defensive line was impossible to break.

A line-out on the opposition five-metre line after sustained Shiplake pressure led to the first scoring opportunity as a successful catch and drive led to Joe Tucker scoring a try. Joe Booth added the conversion.

A kickable penalty 10 minutes before half-time gave Shiplake the opportunity to extend their lead which Joe Booth scored.

The key moments included Richard Adams running a good line of the scrum half and breaking the line, scoring over the half way. Quick hands and accuracy of passes meant another try for Shiplake on their way to their comfortable win.

SHIPLAKE COLLEGE U15C had a tighter match as they ran out 40-34 winners against UNIVERSITY COLLEGE COLLEGE U15s.

Despite conceding three tries in the opening half, Shiplake fought back well. With just one minute left of the match, Cameron Dalziel scored and won the match in the dying seconds.

Shiplake kicked off and defended well until their centre broke through, and scored the first try of the game. Shortly afterwards James Burgess scored to level things up.

Shiplake got caught out again and allowed Gillotts to go over to take the lead. Just before half-time James Burgess scored again to level the scores.

In the second half Shiplake made a break and a well-worked move ended up underneath the posts from Theo Fewtrell.

For the rest of the game Shiplake were camping in their own 22, but good defensive play saw them hold on for a derby victory.