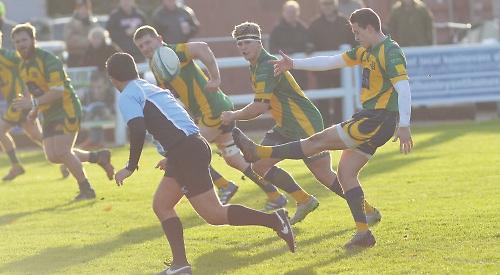 HENLEY HAWKS went into last Saturday’s game on a losing streak having lost their previous three games. In contrast Clifton, after a poor start to the season, had won their last three.

The Hawks, following the heavy defeat at Canterbury, made one major change, at halfback, where Tom Parton was moved up from fullback to fly-half and James Stevenson-Wright came in at scrum-half for George Jackson, the leading points scorer this season, who was on the bench. The Hawks also had James Comben, who has scored more than 1,000 points for the club, as a replacement.

In the course of the game the new halfbacks combined well and Parton made some useful half breaks but the backs were not able to create scoring opportunities against a secure Clifton defence. In the eventuality, as is the familiar factor in rugby union matches, it is the forwards that dictate the final result.

The big Clifton pack were the decisive factor in this game. The Hawks were on the defensive for much of the first half but it was in the set pieces that Clifton had the whip hand. The Hawks could not secure possession on a number of occasions on
their own throws in the line-outs.

On more than one occasion when they chose to throw to the back of the line Clifton disrupted or stole the ball. This coupled with the supremacy they had in the set scrums meant that the first 30 minutes of the game was played almost continually in the home half.

The Hawks’ defence was sound enough to restrict Clifton’s scoring to a penalty by fly-half Brad Barnes, who had 100 per cent success with his place kicks during the course of the game. Barnes put Clifton ahead with a penalty after 32 minutes.

In the closing 10 minutes of the first half the Hawks were able to play the game in Clifton territory particularly through their forwards foraging in the loose where number eight David Hyde and the back row were to the fore with skipper Dave Clements. As a result Parton was able to level the score at 3-3 with a successful penalty. He had an opportunity to put the Hawks in the lead on half-time with another kick from a similar position but sent the ball wide.

With the score at 3-3 the Hawks were well in the match but the third quarter of the game went badly for them and it was in this 20 minutes that the game was lost.

Clifton were revitalised and spent much of this period on the Hawks’ doorstep. The pressure told and when they secured good ball from a set scrum down the left they moved the ball swiftly through midfield where skipper, and former Hawks’ player, Danny Wells put in a thrusting burst to score for Barnes to convert and put the visitors 10-3 ahead.

Clifton, buoyed by this success, continued to dominate possession and then proceeded to produce the best back movement of the game, moving the ball across the line at speed to give left wing Brian Watters enough room to score close to the corner flag which, with a good kick from wide out by Barnes, made the score 17-3.

The Hawks had now conceded five tries down the left touchline deep in the second half in their last four games.

In response the Hawks raised their game and put in some effective driving mauls, some close to half-way but importantly closing in on the Clifton try line and this pressure resulted in hooker Tom Emery crossing the whitewash for Comben to convert.

With the score at 17-13, after Comben had converted a penalty kick, the Hawks were hoping to close in to score at least a bonus point. However it was then that Clifton showed the guile of finishing a closely fought match as they took their time to get to line-out throws so stealing valuable minutes in the final moments of the game. Barnes sealed the game for Clifton by kicking two penalties in the 72nd and 80th minutes.

This was a depressing outcome for the Hawks who have now slipped down to 14th place in the league with only the newly promoted clubs, Exmouth and Barnstaple below them.