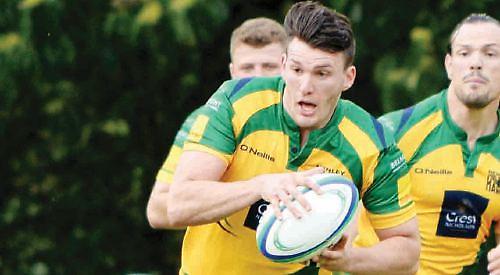 THE head coach of Henley Hawks says there is no reason to panic despite the club slipping into the National League Division 2 South relegation zone.

Hawks lost 23-13 at home to Clifton on Saturday, meaning the 2014/15 champions have now lost four games in a row and are staring at the possibility of a second consecutive relegation.

But Pete Davies says he saw signs of improvement from his team, who were level at 3-3 at half-time, and is confident the side will improve in the coming weeks.

Davies says the Hawks have played well in spells this season but have struggled to maintain that level of performance.

He said: “It’s been a mixed bag, we’ve had some good performances and some average performances in between them.

“We’ve struggled a little bit with consistency and the results have shown that.

“We are now 10 games in to the season and we’re a fair bit off the pace of the teams at the top of the league.

“We’ve had a number of setbacks with injuries, to the front row in particular, and that’s been a big factor. We will hopefully sort that out and go on a run of games to start climbing back up the league.”

Hawks have conceded 311 points this season, the fourth worst record in the league, and Davies said a lot of work has been done recently to tighten up the defence.

He said: “There have been a few times where the boys have let themselves down but we’ve addressed that, especially with the defence to stop conceding so many points.

“We’ve had a good look at that and changed some personnel which will hopefully fix that. I’m confident that it will sort itself out during the season.

“On Saturday we conceded far less in the way of tries so we are going in the right direction.

“We have also been focusing on getting the set piece functioning. When we can get that aspect of the game right things will improve.”

Hawks restricted Clifton to just the solitary penalty in the first half at Dry Leas but shipped 20 points after the break and Davies admitted the visitors deserved their win.

He said: “We didn’t get the bounce of the ball in terms of getting the ball to hand in positions where we could score tries and points.

“We didn’t get on the right side of the referee and looking back he may have made a few errors.

“But they got the better of us up front and sometimes you’ve got to put your hands up and say you were beaten by the better team on the day.

“Their dominance of the set piece put them in control of the game.” Davies also defended leaving the club’s top points scorer this season, scrum half George Jackson, on the bench on Saturday, alongside James Comben, who has bagged more than 1,000 points in his Henley career. The duo were replaced by James Stevenson-Wright and Thomas Parton. Davies said: “Jimmy (Stevenson-Wright) was playing really well for the second team and training very well but he’s hardly had any game time for the first team this year. In Thomas we had an accomplished goal kicker to replace James. George can’t play every single minute of every game and both those boys, George and James, were carrying bumps.

“They didn’t train on Tuesday because of injury and there was no point bringing them back if they weren’t 100 per cent when we have got fit guys that can come in.”

Hawks travel to third-placed Bishop’s Stortford on Saturday with the home side strong favourites to condemn Davies’ team to another defeat.

But he says the lowering of expectations could work to the Hawks’ advantage.

Davies said: “They are near the top of the league but they’ve lost a couple of games. They’re a really good rugby club with good coaches so it will be a tough game.

“The good thing is that for probably only the second time all season we are going in to a game as complete underdogs.

“The pressure is lifted, there’s less expectation and hopefully we can get the result we want.”

Hawks also face away games against leaders Chinnor and fourth-placed Taunton Titans before Christmas but Davies has called for calm and believes his side’s fortunes will improve.

He said: “We are only 10 games in to a 30-game season. We are a third of the way through so there are lots of points up for grabs.

“We have players coming back in which will also help.

“I’m quite confident that we are going in the right direction and can start climbing the league very soon.”