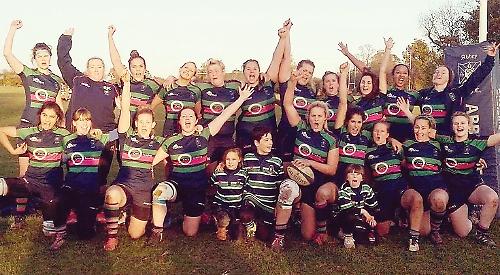 In what has been a remarkable season from Dave Swan’s side, the Nuns put seven converted tries past their opponents and will now certainly sit top of the National Challenge South East West 1 table going into the Christmas period.

The scoring was opened by fly-half Annette Tomas, selected this week to travel to the Dubai Sevens with the Ireland Development squad, after the Abbey forwards won back possession early on. Harriet Driver picked the ball up from the edge of the ruck and drew in two Reading players before offloading to Tomas, who used her pace to charge at the defence to score. Scrum-half Ellie Rice fed a superb ball to Hayley Matthews moments later and the number 12 exploited a gap in the Reading defence to run a brilliant attacking line and bag Abbey’s second.

Abi Wall stepped up to the role of flanker and responded with a solid performance. The Reading University graduate was instrumental in the run-up to Abbey’s third try, opening up the Reading defence and carrying the ball within five metres of the try-line. The move was eventually finished off by Alice Denton, who ran in from the left after good work from Claire Stevens who was voted forward of the match. The Nuns continued their attacking prowess and the game looked beyond doubt when Rice took a penalty quickly and offloaded to King who charged over the line.

Meanwhile Natalie Mitchell earned her second cap for the Nuns and the newcomer was hugely influential in the line-out – successfully stealing the ball on several occasions in the air.

The second half saw Reading slow down the pace of game and frustrate the Nuns through prolonged passages of forward play. But clever kicking from Tomas and Denton meant that Reading struggled to get out of their own half and before long Tomas cut inside to feed Matthews who scored under the posts and followed this up with another impressive attacking line minutes later to bag a hat-trick.