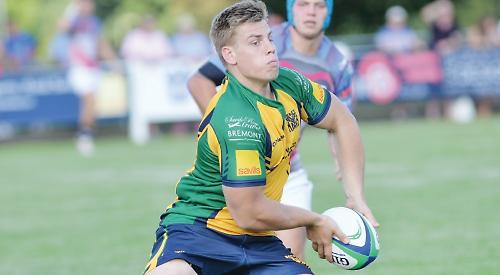 HENLEY Hawks slipped to their fifth consecutive league defeat at Bishop’s Stortford on Saturday despite holding a slender lead with 10 minutes of the match remaining, writes Noel Armstead.

The sides at either end of Division 2 South met in gloomy wet conditions with rain and drizzle falling throughout and resulted in the match finishing in semi darkness without the benefit of floodlights. For the first 60 minutes the Hawks were the better side and deserved to lead 12-10 at half-time.

The visitors started the game in what has become customary fashion by conceding a try in the first minutes. In their first attack in the Hawks territory the hosts developed a handling movement and when deep in the Hawks’ 22 put in a grubber kick which wing Ryan Hutler was able to latch on to before his opposite number Simon Perry to cover it to make the score 5-0. This was increased to 7-0 with a fine kick from close to touch by Tom Banks. The scrum-half also kicked a penalty after 18 minutes, to give his side a 10-0 lead.

The Hawks then showed good control of the slippery ball in hand and kept the home side in the their own half by effective tackling. They were also getting the better of forward play in the set pieces and loose and soon began to show the recently forgotten skill of driving mauls. The backs supported these and centre Liam O’Neill was stopped just a metre from the try line.

After continued pressure the Hawks drove over for hooker Tom Emery to score his second try in two games. This was not added to by scrum-half George Jackson from 30 metres. Although the playing surface was very wet it did not cut up and sadly for the Hawks Jackson had not brought his kicking boots with him for the major points gatherer of the season, with 100 in total, was surprisingly inaccurate throughout the game. He was successful when flanker Tom Hall touched down 10 minutes later.

The Hawks were certainly worth a 12-10 lead at half-time. They continued in the ascendancy at the start of the second half when a good control of scrum was taken advantage of by fly-half Tom Parton, who had kicked effectively throughout the game, with the ball in hand, whose grubber kick took the home defence by surprise and he ran though to touch down. Unfortunately, from a position near the post, the conversion attempt was again off target.

At this stage of the game the Hawks looked as if they were going to ease ahead and league positions were going to account for little. Sadly for the Hawks that was not to be.

Leading 17-10 after 60 minutes the turning point of the game came when they conceded a penalty 10 metres inside the Bishop’s Stortford half. This was kicked long with the resultant line-out 25 metres from the Hawks line. From this centre George Cullen fed replacement prop Seb Brownhill and with an inside pass proceeded to run in an unconverted try to put the home side now only 17-15 in arrears.

However, the Hawks’ missed place kicks now began to be crucial for the Stortford side began to play with renewed confidence and it was then they who started to use driving mauls to threaten the visitors’ line. With just 10 minutes of the game remaining they succeeded in driving their burly hooker Declan Caulfield over for a try, converted by Banks, to regain the lead at 22-17.

The Hawks were now desperate to at least earn a bonus point as an award for being the better side for more than half of the game. None worked harder to do so than number eight David Hyde who stole a home line-out on one occasion just 15 metres out. However, soon afterwards he suffered a shoulder injury which forced him to leave the field.

In his absence the now more dominant home pack drove Caulfield over for a second try to deny the Hawks a bonus point which they deserved for their all round efforts which made it difficult to justify Stortford their high position in the league table.