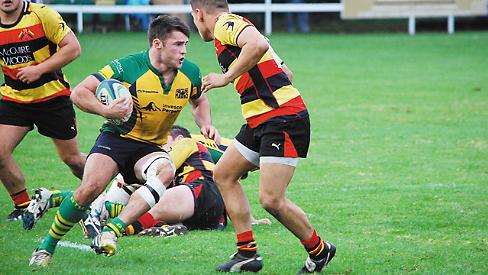 RICHMOND leapfrogged the Hawks in a vital National Division 1 relegation battle on Saturday at the Athletic Ground.

In previous seasons the Hawks have done well at Richmond, winning on their last two visits while also beating the Surrey-based side at Dry Leas earlier in the season. The Hawks started and finished well but the rest of the game went to the hosts.

The Hawks dominated the first five minutes of the game denying Richmond possession and moving the ball well amongst their backs. They crossed the home side’s line after a flowing handling movement from right to left gave room for Martin Nutt on the left wing to squeeze in at the corner. However, the assistant referee judged that the winger had put a foot in touch.

All was not lost as referee Fergus Kirby had been playing advantage for offside and James Comben converted despite the prevailing gusty wind.

Sadly for the Hawks the game went away from them after this and not helped by a plethora of penalties against them they found it difficult to gain any quality possession and this was true in the set scrums, line-outs and rucks.