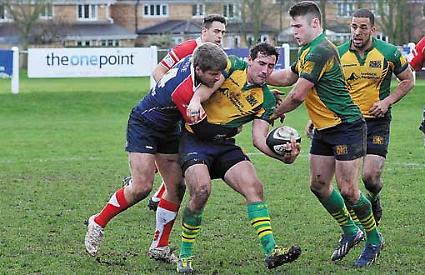 HENLEY HAWKS remained in contention for 64 minutes of an entertaining encounter at a blustery Castle Park against league leaders Doncaster Knights on Saturday.

A gritty first half, with the considerable breeze in Hawks favour, saw the lead change hands three times.

The heavier Knights pack dominated at the scrum for much of the game, only to be met with a well marshalled defensive effort from the Hawks allowing only marginal gains for the opening 30 minutes.

Having held off the Knights to win 10-9 at Dry Leas earlier this season, the Hawks made early forays of their own into the Knights territory with Tom Allen and Danny Wells both using the wind advantage to force the Knights to retreat and collect down-field kicks.

Danny Wells landed a penalty from in front of the posts as the Hawks early pressure forced an infringement from the Knights.

The Knights pack pressed hard and several attempts put width on their attack but they were stifled by determined defence from Ryan Long and Ryan Newman in the Henley back row.

Tom Allen skipped through the defence and ran 30 metres only to run out of effective support as the Knights defence cut off his opportunities to off-load. Xavier Andre showed his pace cutting back from the wing towards the posts from the Knights 10 metre line and was dragged to ground eight metres short but the next wave of Hawks attack was cancelled out by an interception as they attempted to move the ball to the other flank.

Knights centre David Clark and lock Matt Challinor were proving difficult to contain as their strong driving bursts meant the Hawks committing more than one tackler to halt their progress and they began to look the more composed in possession.

On 22 minutes the Hawks defence broke for the first time with a Knights maul initially halted scrum half Chris Hallam who made a dart at the line only to be stopped a metre short. However, Ross Davies, the Knights tight head, collected his off-load to crash over. Wing Doug Flockhart converted with a swinging kick into the wind.

With possession changing hands regularly for the next 10 minutes it was a mistake from the hosts in their own 22 that allowed Ed Yarnton to collect a bouncing ball displaced in a tackle and with his back to goal he turned to sprint between the posts though a stunned Knights rearguard. With Danny Wells adding the easier conversion the Hawks managed to see out the remaining five minutes under pressure but not without cost as Josh McNally was sin-binned for pulling down a maul as the Knights threatened a repeat of their first scoring success.

The first half had taken its toll on the Hawks who retook to the field with 14 men and soon lost Ryan Long who had played a huge roll in Henley defence and been a counter-attacking threat on several occasions bringing his side back to safer territory. He was replaced by Ben Ashmore on 42 minutes after the hosts had restored their lead exploiting the weakened Hawks pack at the scrum and bursting down the left flank where wing Lewis Tyson went over despite some desperate cover tackling.

Doncaster appeared to dominate the scrum throughout the first half although No8 Rob Stapley and Carter managed to weather the pressure at the base of the set-piece to allow enough of a platform to ease the pressure.

The Hawks replaced both Jim Hadfield and Dave Manning in the front row on 52 minutes with Rauiri McLoed and Sam Steventon adding some fresh legs but before the prop pairing could make any impact Steventon was forced to leave the field with a hamstring injury. James Hadfield returned to duty in the front row.

With a narrow 12-10 lead and the Hawks efforts beginning to faulter centre David Clark added the first of his brace of tries on 52 minutes, intercepting a pass from Mcloed to Newman as the Hawks pressed into Donasters half.

With the Knights now leading 24-10 the Hawks made a mighty effort to stay in touch for a further 12 minutes when scrum-half Luke Carter suffered an injury leaving the Hawks struggling to cover the growing threat of the Knights back line.

Carter carried on bravely until the 71st minute but by then Glen Bryce the Knights fullback had breached the defence with a jinking run to score and give the the hosts an unassailable 29-10 advantage.

Carter was eventually replaced by James Bloxham with Tom Allen forced to switch to scrum-half. The try of the game came two minutes from time when flanker Michael Hills cut back into the Hawks defence splitting the three-quarters and deftly lifting the ball to Doug Flockhart who went on to convert his own try ensuring the win and 36-10 score.