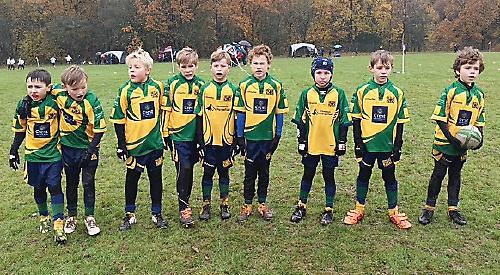 HENLEY U9s put in a good performance as they won four out their five matches played at the Amersham and Chiltern tournament on Sunday.

With heavy rain overnight and all morning the pitches at Amersham were not in good shape. Luca Coleman controlled things well in the second game and produced a good all-round display. Sam Snowdon stepped up to the mark and revelled in the mud tackling everything that moved and scoring the first try of the day. Jack Bradbury scored his first hat-trick while William Tavinor tackled well and Alexander Clarke demonstrated good pace running in a number of tries.

The cold and rain took its toll on the Henley team who beat Beaconsfield, Amersham, Maidenhead and finally came up against a large Luton side. The game was played in good spirit with strong tackling from both sides. Noah Mercer drove forward taking many Luton players with him as Henley won by five tries to four with Alexander Clarke running in two tries and Luca Coleman one try. Henley’s only defeat was against another Amersham side.