Yellow cards feature of game as Abbey suffer an off day 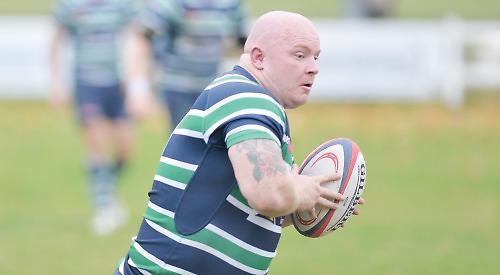 ABBEY failed to do themselves justice in their South West 1 East clash with Banbury, going down to a disappointing defeat at Rosehill.

The home side looked strong on paper but rarely dominated against well-drilled and organised opponents who looked better than their league position would suggest.

Debutant outside half Ben Mitchell was quickly involved in the action as Abbey made a bright start. He linked well with his half back partner Will Paige, and with centre Luke Burns running well Abbey were soon in the Banbury 22. Hooker Mark Toland and skipper Sam Hallett made ground from driving runs, winger Arron Ross attacked up the blindside and prop Ed Whelan made further ground before the visitors conceded a penalty which was missed by Olly Walton.

Banbury’s line-out looked vulnerable in the opening 15 minutes and from their first throw number eight Will Woodward claimed the ball and set up a home attack. Alarm bells started to ring when careless passing allowed Banbury to reclaim the ball and release left winger Alex Gandy. A constant thorn in Abbey’s side with his strong running and sterling defence, Gandy looked to be on his way to the line before the combined efforts of Burns and Ross hauled him down. Mitchell cleared well, flanker Kacper Kruzycki stole another Banbury throw, but again Abbey lost the ball. This time Banbury scrum half Ed Phillips broke, and fullback Gavin Dampies did well to down winger Josh Deegan.

The early scrums looked steady with both sides winning their own ball. Banbury made far better use of set piece possession, with number eight Chris Phillips and outside half Alex Stevenson both dictating play well. Woodward gathered another wayward Banbury line-out throw and made 10 metres, but a knock-on spoilt this move.

Dampies made 10 metres with a trademark run, flanker Maurice O’Connell made a good burst from a line-out, but missed tackles allowed Banbury to mount a counter attack. The visitors made it to the Abbey 22 and instantly looked dangerous. Dampies halted Deegan wide on the right, but eventually Abbey ran out of defenders as Banbury went through the phases, and skipper Ian Isham burst through a gap to touch down under the posts. Ed Phillips converted and Banbury were ahead at the end of the first quarter. While Banbury looked increasingly impressive, Abbey struggled to make an impact. They were not helped by some wayward kicking out of hand, although there was one promising move when Mitchell, Burns and prop Linden Dixon attacked on the blindside. Yet again though the ball was lost, and Gandy brushed aside no fewer than three attempted tackles as he took play back into the home 22. A penalty resulted, and Ed Phillips made no mistake to stretch the lead to 10-0 after 32 minutes.

Shortly before the break, Mitchell was injured and had to leave the field. His departure resulted in a reshuffle for Abbey’s back division. Will Bevan came on at scrum half, Paige moved to the wing, Ross to the centre and Burns to outside half. Another burst from Woodward and Hallett promised to set up another Abbey attack, but Banbury had the last chance of points in the first half, Ed Phillips narrowly missing with a penalty attempt.

Knights replaced Michal Kruzycki at the start of the second half, and again Abbey started brightly. Woodward had a run of 40 metres and within two minutes of the restart Walton kicked Abbey’s first points with a well-struck penalty. Banbury’s restart kick was knocked on and almost at once the visitors’ lead went back up to 10 points when Ed Phillips landed another penalty.

At this point things began to go wrong for Abbey. With an increasingly confident Banbury pounding away at the home line, first Paige and then O’Connell were yellow carded for offences close to the try line. Initially Banbury failed to take advantage and home hopes were briefly raised when Abbey booted a loose ball into the visitors’ 22. Dampies gave chase, but he was unable to control the ball.

Abbey replaced Whelan with Ollie Charlton. Knights won some good line-out ball, but Abbey missed the chance of escaping from danger when Burns failed to find touch from a penalty. Burns and Ross then exchanged passes in a promising attack but further dropped passes allowed Banbury back into the home 22. Eventually, after sustained pressure, a chip to the left from Ed Phillips was collected by centre Jack Briggs and Banbury had their second try. The scrum half could not convert from the touchline, but at 18-3 down Abbey now looked in serious trouble.

Paige returned from the bin, and a 30 metre run from Dampies was well supported by Kacper Kruzycki. Woodward drove to within two metres of the Banbury line, but Abbey were penalised and again conceded an extra 10 metres through backchat. O’Connell returned, and with all their men back on the field Abbey mounted a series of desperate attacks.

Hallett made 10 metres, Burns, Toland and winger Charlie Gingell supported well, and now Banbury’s discipline let them down. When flanker Cash Chilvers saw yellow for an offence in his own 22, Abbey elected to take a scrum, and Woodward was held up over the line when he made a break.

A 50 metre jinking run from Dampies kept the pressure on Banbury and after good support from Bevan, Toland appeared to have crossed for a try but referee Adam Carpenter blew his whistle, binned Chris Phillips for tackling a man without the ball and then ran in under the posts to award Abbey a penalty try. Walton’s conversion gave the home side just a glimmer of hope.

Abbey were unable to make the most of their two-man numerical advantage. The best chance they had was when Dampies broke down the left wing, but the impressive Gandy was too strong for him and forced him into touch. Chilvers returned after his binning, and soon the teams were level at 14 men each, as Whelan, who had returned for the injured Charlton, became the third Abbey player to receive a yellow card. The game ended soon afterwards with Banbury on the attack and looking the more likely side to score.